20 MP ministers resign as Kamal Nath tries to save govt

The Congress government in Madhya Pradesh plunged into a political crisis on Monday after a sulking Jyotiraditya Scindia, along with at least 17 MLAs, virtually raised a banner of revolt prompting Chief Minister Kamal Nath to call a late-night cabinet meeting where around 20 ministers present resigned reposing their faith in his leadership. 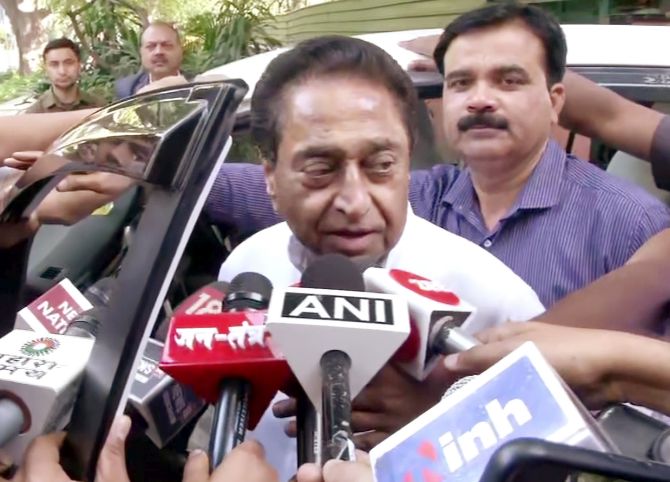 Nath alleged that the Bharatiya Janata Party was adopting immoral ways to "destabilise my government" and vowed not to let it happen.

After the dramatic developments, MP Forest Minister Umang Singhar said, "We have resigned. Now it is up to the chief minister to take a call."

The minister said they have requested the chief minister to reconstitute the cabinet.

Nath had cut short his Delhi visit and rushed to Bhopal where he had called the urgent cabinet meeting around 10 pm after a faction led by senior leader Jyotiraditya Scindia who, along with at least 17 legislators, went incommunicado, sparking intense speculation about the fate of his government.

Many of these legislators, including ministers, had flown to Bengaluru earlier in the day.

Scindia, however, kept his cards close to his chest and there was no word from him on the developments.

The BJP, meanwhile, called a meeting of its MLAs on Tuesday, where sources said Shivraj Singh Chouhan may be elected as the leader of the legislature party.

Trouble has been brewing in the Congress ahead of Rajya Sabha polls as it had last week accused the BJP of trying to topple its government after 10 MLAs of the ruling party and those of its allies travelled to Haryana, though the BJP had denied the charge.

Of them, eight had come back and many of them wanted ministerial berths, according to sources. However, two Congress MLAs have not yet returned.

Scindia and Nath have fallen out over the post of the state Congress president, which is currently held by the chief minister.

While calls made to Scindia remained unanswered on Monday, mobile phones of at least six ministers who are supporters of the Guna royal are switched off.

Sources said several legislators, including a few ministers, arrived in Bengaluru by chartered flights and were staying at an undisclosed location.

"It is a fight for survival of Scindia now. It is a do or die battle for Scindia and his group which is being sidelined," a source close to the scion of erstwhile Gwalior kingdom said.

Earlier in the day, a section of Congress leaders, mostly of Kamal Nath camp, demanded that Priyanka Gandhi Vadra be nominated from the state for the upcoming Rajya Sabha polls, seen by many as an attempt to thwart Scindia's chance to reach the Upper House.

Nath, who left for Delhi on Sunday night, was supposed to come back to Bhopal on March 12 after celebrating Holi, but returned after meeting Sonia Gandhi in the national capital, and went into a huddle with Digvijay Singh and other senior leaders at his residence, before calling the cabinet meeting.

After the meeting with Gandhi, Nath said any decision on the party's nominees for Rajya Sabha polls would be taken unanimously.

"All issues were discussed with the Congress president and everything will be resolved unanimously," he told reporters in Delhi.

The Madhya Pradesh chief minister, however, skirted the issue of whether Scindia can be nominated for the Rajya Sabha seat from the state.

Even as the government appeared to be on a sticky wicket, Public Relations Minister PC Sharma claimed, "It will last its full five-year term and there was no political crisis."

"Just now we have handed over our resignations to the chief minister at the cabinet meeting," another minister Sajjan Singh Verma told reporters, adding that it was to express their solidarity with Nath.

Earlier Nath told the cabinet meeting, "I will not allow (anyone) to destabilise my government with the help of mafia."

"I have dedicated all my life to serving the people, but the BJP has indulged in immoral ways to destabilise my government. My biggest strength is people's faith and their love showered on me. I will not allow any-one to destabilise the government elected by the people," he said.

While factionalism has reared its head again in the Congress, the BJP too was having some anxious moments due to a couple of MLAs.

Four Independent MLAs, two lawmakers of the Bahujan Samaj Party and one legislator of the Samajwadi Party are supporting the Congress-led state government.

As per the arithmetic in the 230-member Madhya Pradesh Assembly, the two parties are sure to win one Rajya Sabha seat each, but a tussle is likely for the third seat.

Two assembly seats are vacant following the demise of a Congress and a BJP legislator.

BJP MLA Narayan Tripathi had frequented Nath's residence last week and had, along with another legislator Sharad Kol, missed the saffron party's meet on March 3.

Tripathi and Kol had gone against the party and voted in favour of a Congress-sponsored bill in the state Assembly in July last year.

The BJP has called a meeting of its 107 MLAs on Tuesday ahead of the March 16 budget session of the state Assembly and the Rajya Sabha polls for three seats scheduled on March 26.

Sources in Delhi said former Madhya Pradesh chief minister Shivraj Singh Chouhan may be elected as the leader of the BJP legislature party in the meeting on Tuesday.

Chouhan, they added, has briefed the top party brass, including its president J P Nadda, about the developments in the state.

The party had sent a list of 20 to 22 names, including that of national general secretaries Ram Madhav and Kailash Vijayvargiya, to its central poll panel to pick two candidates for the RS polls.

Members of a state's Legislative Assembly vote in the Rajya Sabha elections.