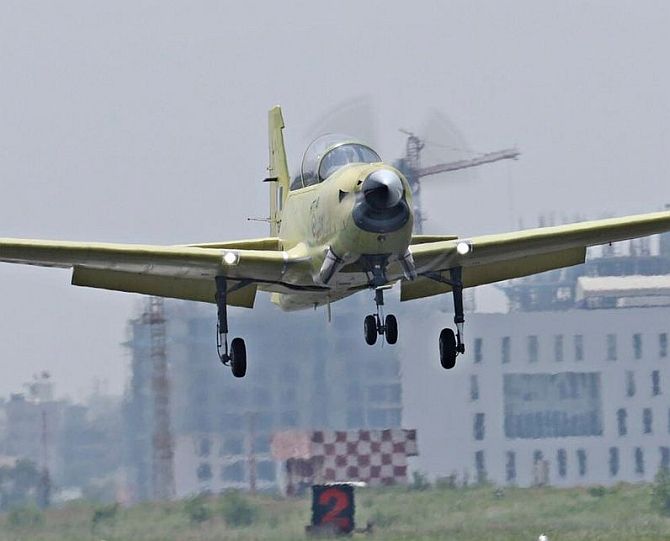 The two-seater aircraft designed and developed by the Hindustan Aeronautics Limited was flown by Group Captain C Subramaniam and Group Captain Venugopal for about 10 to 15 minutes at the HAL airport.

Aimed at being used for the first stage training for all flying cadets of the three services, HTT-40 made its maiden flight on May 31.

Detailed design phase of HTT-40 was launched in August 2013 with HAL's internal funding and was completed in May 2015. From then, it has taken 12 months to fly the first prototype.

While the HTT-40 programme was almost junked during the UPA rule, Parrikar pushed both IAF and HAL to ensure development of the trainer.

Complimenting the HTT-40 team for the accomplishment, he said, "when I came here in March 2015 the confidence they had infected me also. They had promised me within one year they will fly the aircraft. I'm happy that they have kept the assurance."

According to HAL, the team behind HTT-40 programme is "young" with an average age of 29 when it started.

The programme aims to achieve its operational clearance by 2018, and towards this the company will be manufacturing three prototypes and two static-test specimens.

Also, work has started on the stall and spin tests campaign in order to meet the project timelines.

The defence minister said, "I request them to bring it still earlier, by the beginning of 2018, so that they can go
into serial production in 2018 itself."

He said while HAL would supply HTT-40 to the defence forces, it would be permitted to undertake certain percentage of export.

Stating that HAL has proven track record in the design and development of basic trainer, Chairman T Suvarna Raju said HTT-40 was an example of the company's commitment to indigenously developing trainer aircraft for the armed forces.

Responding to a query on the Air Force earlier being "hesitant" about the country-made aircraft, Parrikar said, "the initial issue was the legacy of the past ... HHT-40 was never encouraged earlier. Our government, with the initiative of Make in India, provided the support."

The defence minister added that the IAF has been very positive about this development.

Earlier, the IAF had blocked funding for HTT-40 by telling the defence ministry that the aircraft would be too expensive, heavy and not able to meet its needs. It had instead backed a Swiss trainer, the Pilatus PC-7 Mark II.

Parrikar also said, "though price is not finalised, I can only confirm this that this flight may be 20-25 per cent cheaper than the imports."

HAL chairman Raju said the programme has managed to glide through multiple headwinds and emerge successfully.

He said till date the aircraft had completed seven flights, and added, "The initial performance assessment has met expectations and further flight testing is under progress."

The aircraft on its third flight flew in heavy rains and successfully undertook wet runway landing.

Designed to meet the current demands of the Air Force, there was also a provision to include weapons for the trainer aircraft.

According to HAL officials, the indigenous content on HTT-40 is close to 80 per cent with about 75-plus systems out of the total 90 on the aircraft sourced from local players and sister divisions of HAL.

They said the role of private players and MSMEs had been significant in the production of parts and assembly jigs.

Almost 50 per cent of the 4,000-odd components on HTT-40 are manufactured by private players.