Lynching a western concept, don't use it to defame India: RSS chief Bhagwat

Rashtriya Swayamsevak Sangh chief Mohan Bhagwat said on Tuesday that the RSS was firm on its vision of India as a "Hindu Rashtra". 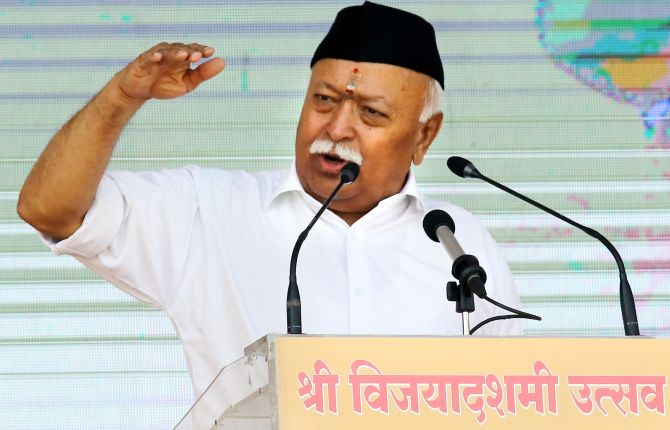 IMAGE: In his annual Vijayadashmi speech, RSS chief Mohan Bhagwat said the word 'lynching' does not originate from Indian ethos but comes from a separate religious text. Photograph: ANI Photo

Addressing the traditional Vijayadashmi function of the Sangh in Nagpur, Bhagwat denied that RSS was Islamophobic, and objected to the use of the word "lynching" to describe incidents of mob violence in India.

He also said that too much discussion about "so-called slowdown" could be harmful, and indicated that the Sangh was not opposed to Foreign Direct Investment and divestment.

He also lauded Prime Minister Narendra Modi and Unio Home Minister Amit Shah over the government's move to abrogate Article 370 in Jammu and Kashmir, but said some vested interests do not want the country to be strong and vibrant.

Voicing his displeasure about incidents of mob violence, he said, "Lynching is not a word from Indian ethos, its origin is in a story in a separate religious text... Lynching itself is a western construct and one should not use it in the Indian context to defame the country."

Saying that some people try to link the RSS with mob violence to defame it, Bhagwat added that even Pakistan Prime Minister Imran Khan has learnt to blame the Sangh for every thing.

In the past few years, there has been a transformation in "direction of thought process of `Bharat'", Bhagwat said.

"A developed Bharat creates fear in the minds of vested interests... such forces will also not want Bharat to be strong and vibrant," the RSS chief said. 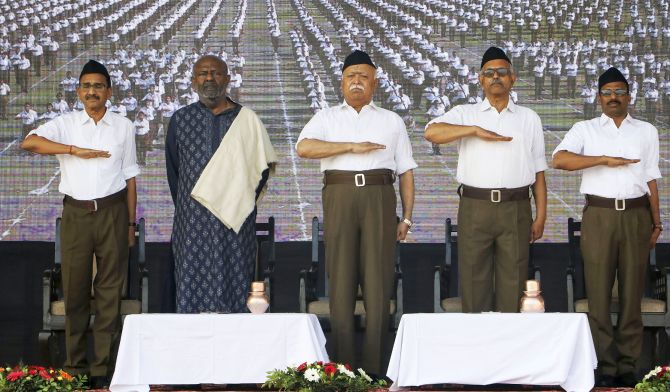 Saying that well-intentioned statements of people in the government are misinterpreted on purpose, he added that "we must be alert in identifying these plots and counter them on intellectual and social levels."

Before his speech, Bhagwat performed 'shastra puja' (worship of weapons). HCL founder Shiv Nadar was the chief guest at the event.

Talking about RSS's concept of "Hindu Rashtra", he said all Indians working for the nation's glory and enhancing its peace are Hindus.

"Those who belong to Bharat, those who are descendants of Bharatiya ancestors, those who are working for the ultimate glory of nation and joining hands in enhancing peace, respecting and welcoming all diversities; all those Bharatiyas are Hindus," he asserted.

He denied the allegations that RSS and its associates are 'Islamophobic', calling it propaganda.

"It is true that Islam came to India through some invaders and there had been some battles. The memories of it have lingered longer in minds. But still, it does not mean unifying Hindus is part of opposition to Islam," he said. 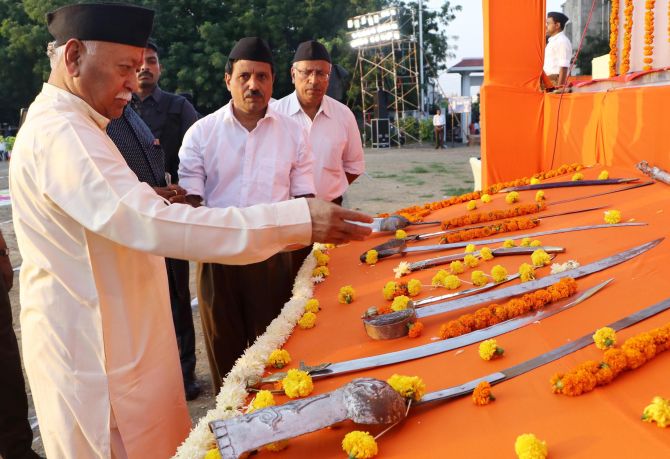 About the economy, Bhagwat said the talk of slowdown could be counter-productive as it can affect people's and businessmen's sentiment, leading to further decline in spending and economic activity.

Disinvestment, if necessary, should be carried out, he said.

Gross Domestic Product is a "faulty" parameter to judge economy, he opined, amid concerns about India's GDP growth.

"We will come out of this (slowdown) phase. The government is taking efforts. We need funds, for which the government is encouraging FDI. Some major industries are being divested. When it (disinvestment) is necessary, there should not be any problem with it. It is a solution," Bhagwat said.

The RSS champions `Swadeshi' (policy of backing domestic products), but it did not mean breaking ties with the world, but achieving self-reliance, he contended.