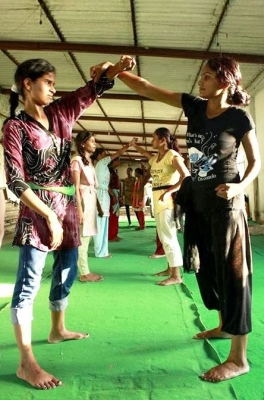 It's that time of the year when love blooms in the urban heart and ardent swains agonise long and hard about gifts for their beloveds. Yet, in other parts of India, where men see every woman walking alone on the streets as fair game, Valentine's Day seem to have little relevance, says Geetanjali Krishna

That is why I raised a silent cheer for Red Brigade, a group of spirited young girls fighting for their rights in the squalid and backward Lucknow neighbourhood, Madiyaon - who is organising a three-hour class in self-defence for 1,000 girls aged over 13 on Valentine's Day, as part of their campaign, One Billion Rising.

So on a day when lovestruck girls in metros will dream of bouquets from their boyfriends, a thousand-odd girls in Madiyaon will (hopefully) learn to beat their attackers to a satisfactory pulp.

Led by teacher Usha Vishwakarma, who found that the reason so many of her students were dropping out was the daily violence they faced, not just from men on the streets but also the ones in their own families -- the brave girls of Red Brigade don their uniforms of black and red black salwar kameez, train regularly in martial arts and target sexual offenders.

They learn to punch, kick and break the strangleholds of prospective attackers, but more importantly, gain confidence and knowledge of issues pertaining to gender, sexuality and health. "When we first started out, everyone ridiculed us. Today, for every two people who oppose us, there are 10 who stand by our side," says Vishwakarma.

For these girls who have to fight for their safety every day, Valentine's Day must seem like an anathema, or at best, an unreal joke. Instead, the idea of a festival of love has permeated the collective consciousness of their community in unforeseen ways.

"If a girl wants to go out of her house on Valentine's Day, her family as well as everyone on the street thinks she's going to meet her boyfriend," says Vishwakarma. "She faces more harassment than usual from roadside romeos, as well as familiar pressure to stay home."

So, Red Brigade decided this year to do their bit to make Valentine's Day relevant for themselves and the girls they represent. The self-defence class seemed like a great idea.

"We wanted to have it in Madiyaon instead of Lucknow. Our idea was to give young girls a chance to step out -- and their families to see how empowering self-defence training could be for their daughters."

Vishwakarma and her friends know that they can't achieve much in a mere three-hour class.

"We'll teach them some basic self-defence techniques and holds, but realise that unless the girls practise them, this won't amount to much," she says. "Maybe it will spur more girls to learn the martial arts..." Also, since the class will be held in their community, Red Brigade hopes that the sight of a thousand girls kicking and punching their would-be attackers would help bring about a change in everyone's attitudes.

"We need to send a strong message to families of girls that instead of cloistering their daughters within the home in the name of protecting their modesty, if they allow them to learn to fight back, they'll protect them more effectively," she says.

As for the 1,000 participants of their self-defence class on Valentine's Day, the Red Brigade has some important lessons to teach. Vishwakarma says, "The confidence to defend oneself is necessary for a positive self-image. On Valentine's Day, we want to tell our girls that you can't truly love someone else until you learn to love yourself..."

A profound and powerful thought for Valentine's Day, don't you think?