Cine stars such as Rajinikanth, Shahid Kapoor, Boney Kapoor and Kangana Ranaut were among the guests who attended Prime Minister Narendra Modi's swearing-in ceremony on Thursday. Boney said he was honoured to be invited for the ceremony. "The kind of victory they have had, It is almost like a celebration. It is celebration of democracy. Something good has happened and it will continue to happen," Boney told PTI.

Before she flew in from Mumbai, Ranaut told reporters she wished Modi all the best for his future endeavours. IMAGE: Actor Rajinikanth and his wife Latha at Rashtrapati Bhavan for the swearing-in ceremony of Narendra Modi. Photograph: / ANI/Twitter

"The PM has set some goals and we all heard that in his speech. All our best wishes with him, that he is able to do what is best for the country and be able to fulfil all his goals. He is an extremely loved Prime Minister. He is here because of his hard work, we all can only appreciate him," she said.

Oberoi, who played PM Modi in a biopic and had also attended the swearing in ceremony in 2014, said, "I'm watching @narendramodi bhai taking his oath for the 3rd time on his journey from CM Gujarat to PM of Bharat once again! Feeling like a small part of an incredible history." Bhandarkar wrote, "Feeling honoured to be attending the historic #OathCeremony of Shri  @narendramodi ji for the #ModiSarkar2. Wishing the very best to all the newly appointed ministers." 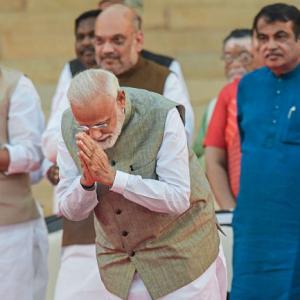