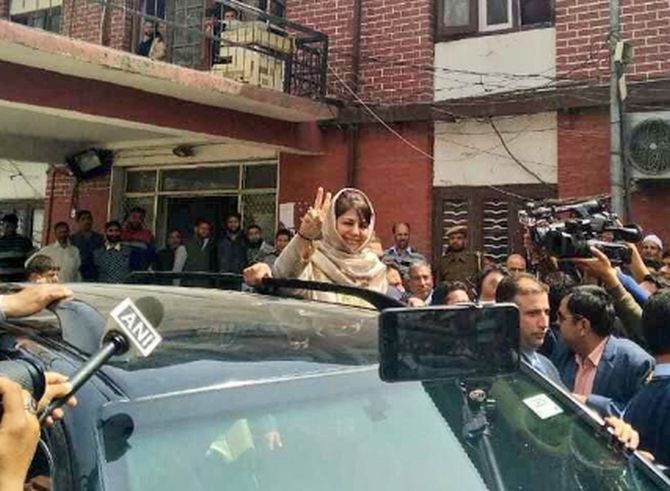 National Conference president Farooq Abdullah and Union Minister Jitendra Singh were among the prominent faces to make it to the 17th Lok Sabha.

In the low-turnout contest, Masoodi, a political greenhorn, fought off a stiff challenge from Congress state president G A Mir, defeating him by a margin of 6,676 votes. Mufti got only 30,500 votes.

In Udhampur seat of Jammu region, Singh is set to win as he is leading by a huge margin of 3.49 lakh votes over Congress's Vikramaditya Singh, the son of Jammu and Kashmir's last prince, Karan Singh.

He had defeated former Union minister and Congress leader Ghulam Nabi Azad in 2014.

The BJP's Jugal Kishore has gained an unassailable lead of 2.89 lakh votes in the Jammu seat.

The Congress is looking at drawing a blank across the state even though the National Conference and the PDP had not fielded candidates for Jammu and Udhampur seats in order to consolidate anti-BJP vote.

The grand old party is unlikely to wrest the Ladakh seat from the BJP as its candidate stood last in a field of four contestants.

The BJP's J T Namgyal is staving off a stiff challenge from Independent candidate and journalist-turned-politician Sajjad Hussain by leading in Ladakh by 9,000 votes.

Rebel Congress candidate spoiled the game for the grand old party and Hussain by so far bagging 29,000 votes.

In Baramulla constituency, the most-keenly contested seat in Kashmir region, both in terms of candidates and people's participation, NC candidate Mohammad Akbar Lone is leading by over 30,000 votes.