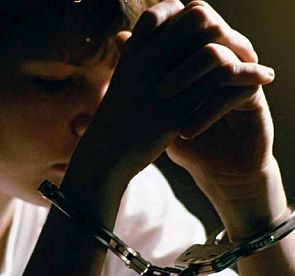 The Lok Sabha on Thursday passed a bill that provides for trying juveniles aged between 16 and 18 years for heinous crimes under laws for adults, with the government insisting that it had tried to strike a ‘fine balance’ to ensure that no injustice was done to innocent children.

Also read: Rediff said it first: Juveniles, accused of heinous crimes, to be tried as adults

The Juvenile Justice (Care and Protection of Children) Bill was passed after the government agreed to delete Clause7 which said that "any person, who is apprehended after completing the age of 21 years, for committing any serious or heinous offence when such person was between the age of 16 to 18 years, then he shall, subject to the provisions of this Act, be tried as an adult."

At least 42 official amendments were moved by the government to the bill which were adopted, while all the amendments moved by opposition members such as Shashi Tharoor (Congress) and N K Premchandran (Revolutionary Socialist Party) were negated.

Opposition members opposed the proposal to raise the age bar, expressing apprehensions about misuse and violation of rights of children by the new law which is being enacted against the backdrop of the involvement of a 16-year-old in the 2012 Nirbhaya gang rape case.

However, Minister for Women and Child Develoment Maneka Gandhi said she has tried to be ‘pro-child’ and made efforts to strike a ‘fine balance’ between justice to victims and rights of children.

Rejecting the allegation that she only loved animals and not children, Gandhi said the new law was intended to be a ‘deterrent’ to ensure that juveniles refrain from crimes and avoid spoiling their lives.

Justifying the need for the new law, she said according to National Crime Records Bureau, around 28,000 juveniles had committed various crimes in 2013 and of them, 3,887 had allegedly committed heinous crimes.

She also cited a recent Supreme Court order wherein the Apex court had favoured a relook at the law in view of the growing number of juveniles involved in heinous crimes.

“The new law is meant to apply to such 3,887 juveniles out of 47.2 crore juvenile population of the country,” Maneka Gandhi said while seeking to allay concerns of the members.

Rejecting the contention by opposition that the recommendations of the parliamentary Standing Committee were disregarded, she said 11 out of 13 recommendations have been accepted.

To concerns expressed by some members that the new law may be misused against the poor, ‘adivasis’ and other deprived sections of the society, the Minister said most of the crimes are committed against the poor people and she was trying to ensure justice to them.

She underscored the point that poverty may provoke anger and envy but it cannot be used as an excuse for crimes. She suggested that there could be some other factors for crimes.

“We do not want to be mean to children.... This act is a deterrent,” said Gandhi, as she rejected allegations that while she loved animals, she was not favourable to juveniles.

To the contention of some opposition members that there should not be any knee-jerk reaction over Nirbhaya case, she said even a “single crime is equally worthy of punishment” and any law cannot be lopsided.

She underlined that under the proposed law, any juvenile aged between 16 years and 18 years will stay in Borstal, an institution meant for housing adolescent offenders, till the age of 21 years whatever be the sentence.

Also, under the new law there will be no provision for death sentence or life imprisonment.

At the age of 21 years, their behaviour will be assessed and if an offender has reformed, his sentence may be curtailed.

Their cases will be tried by a Juvenile Justice Board, which will include a sociologist and a child rights activist, Gandhi said while underlining that she had prepared the bill after exhaustive consultations, including with judges who tried the Nirbhaya case.

Gandhi rejected the opposition contention that the age of 16 years was too less to be tried under laws meant for adults and violative of international conventions.

She said under the global conventions, definition of age for such crimes is contextual and depends of economic, social and other conditions prevailing in a particular country.

Giving examples, she said such age criteria in England and Australia is 10 years while in Argentina it is 16 years.

She said another positive aspect of the proposed law related to adoptions for foster care, wherein families can take custody of children to look after them and educate them, without really adopting them. Funding for it will be made by the government, Gandhi said.

When Deepender Hooda (Congress) said that allocation of funds for child welfare schemes had been reduced, the Minister said Rs 430 crore earmarked under ICPS scheme for setting up juvenile centres etc was sufficient.

"Where it may hurt is ICDS (allocation) and the government is having a look at it," she added.