Shattered by the party's worst debacle in the elections, Congress president Sonia Gandhi and vice president Rahul Gandhi on Monday offered to resign accepting responsibility but the party unanimously rejected it.

Their offer came at a meeting of the Congress Working Committee in the backdrop of rumblings in the party over the style of functioning of Team Rahul and demands for  action against them.

The party authorised the party chief to carry out for a "thorough revamp" at all levels and passed a unanimous resolution expressing their total faith in the leadership of the Gandhis as it debated the way ahead in in the party's apex decision-making body.

"Accountability has been talked about. Wait for the reorganisation," was the succinct answer from party general secretary in-charge of organisation Janardan Dwivedi who briefed the media after the CWC meet.

The CWC resolution pledged to the millions of Congress workers that it will create within the party opportunities and structures that will pave the way for a "thorough revamp of the organisation at all levels".

It was preceded by the categorical assertion by the CWC that "both the government and the party must share responsibility for the failure and we do so."

Making his resignation offer, Rahul said he feels that the kind of accountability he feels there should be in the party is not there and he begins this accountability by offering to relinquish the post as felt he could not fulfill the expectations party leaders had from him.

The Congress president said "I believe I have not been able to bring about the necessary changes to strengthen the party. Therefore, I take full responsibility for this crushing defeat and I am prepared to relinquish my position."

Rejecting the resignation offers of Gandhi as "no solution," Prime Minister Manmohan Singh said he, being the head of the government, also takes responsibility for whatever shortcomings existed at the government level.

Party leaders said this was perhaps for the first time that the Congress chief offered to resign after electoral debacle. The constitution of a committee to go into the debacle is likely with Sonia telling the meeting that "as a party, we must introspect on the results in all seriousness and in depth."

She said "most of all what we need for our party is to accept that unless we undertake some structural changes, we will not be able to meet the serious challenges we face."

The communication strategy of the party came under severe criticism at the meeting which saw some general secretaries also expressing their readiness to quit their posts in order to give the party leadership a free hand in reorganizing the party structure as per the requirement, sources said.

The role of a "hostile media" also came in for a scrutiny at the meet with most of the leaders feeling that there was a slant in general reporting in favour of the Bharatiya Janata Party. The CWC also saw members raising concern over "never-before polarisation on communal lines" in this election, which saw the BJP managing a record tally of 282 seats and Congress just 44 in a House of 543.

"I also believe that the message of the Congress was lost in the din and dust raised by an aggressive and polarising campaign by our opponents, which was backed by unlimited resources and a hostile media," Sonia said.

We should also ask ourselves, have we failed, both as government and party, to communicate our achievements?... It is vital that we ask these questions and more at every level...What we need is a clear-headed and fresh thinking that will help us correct our shortcomings.

Some leaders also expressed concern over the way the Rashtriya Swayamsevak Sangh helped the BJP in polarisation.

When Sonia and Rahul offered to resign, there was silence for a few minutes, which was broken by party leader Ajit Jogi who disapproved of any such act. Those who spoke after Jogi, including Ghulam Nabi Azad, Anil Shastri and others, said the party needs the Gandhis all the more time when the BJP is a resurgent force with the full backing of the RSS. 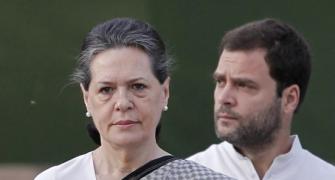 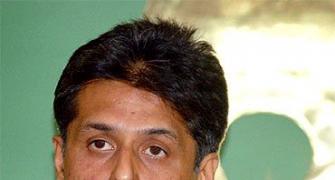 Resignation of party leadership is not the way forward, says Cong leader 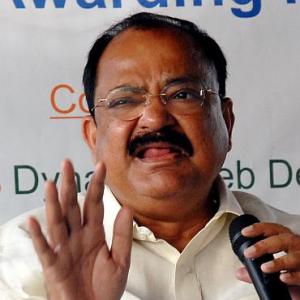 Shocking that Cong doesn't have courtesy to greet Modi: Naidu