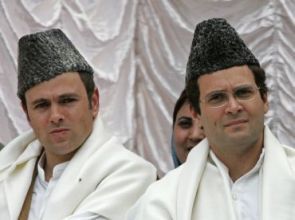 Jammu and Kashmir Chief Minister Omar Abdullah today took "total responsibility" for complete rout of the National Conference-Congress coalition in Lok Sabha polls in the state, and said the result was a "rude awakening" for those who wanted to wish away the Modi factor.

"It is for me to accept complete and total responsibility for the outcome of this election in the state...," Omar said, adding that "I hope that they are able to adequately represent the wishes and aspirations of the people of Jammu and Kashmir in Parliament".

Asked whether he would step down as chief minister, he said he was "still grappling with" it, and added he would not hesitate to do so if the leadership wanted that from him.

National Conference and Congress alliance candidates have already lost in 3 of the state's 6 Lok Sabha seats and starring at defeat in the rest.

Congratulating PDP, BJP and NDA, Omar said, "Those who wanted to wish away Modi factor in the elections had a rude awakening." He admitted that Modi was an important factor in this year's Lok Sabha polls but his performance in Parliament and governance has to be seen.

"Those of us who very conveniently sort of wished away the Modi factor in this election have had a rude awakening. Clearly, most observers underestimated the impact he would have on this election. Now what impact he has on Parliament (and) governance, particularly with regard to Jammu and Kashmir, we will have to wait and see," he said.

He said the verdict will have far reaching consequences in the country. It will be for the first time since 1984 that the country can have what could be a one-party government.

Asked if he had thought about stepping down as chief minister in view of the election results in the state, Omar said, "This is parliamentary election. This is not an Assembly election. I have accepted the responsibility for the performance of the alliance in the state in this election."

"Beyond that should I continue or not is a question that I am still grappling with. It is not something that has clear cut answers. I  also need to recognise that it is the decision that my party and the allies have to take. I am taking responsibility and I am not shying away from it. It is my defeat more than anybody else's," he said.

Omar said if the National Conference and Congress leadership wanted him to step down, he will have no hesitation to do so. He said while the alliance partners were aware of a tough fight, he did not expect the one sided results.

“While I knew that we had a difficult challenge on our hand, I did not expect this comprehensive, one sided result in the state today. The voters have spoken today and we accept that verdict with all humility," the chief minister said.

He said the verdict would obviously have far reaching implications in the state and the party would analyse the the debacle in the days to come. "Exactly what the implications are it is too early to tell. We haven't yet been able to analyse the reasons for this verdict but needless to say that there are important lessons to be learnt," he said.

Omar said the focus of National Conference - Congress coalition on national issues rather than development report of the five-and-a-half years' government in the state had cost them in the elections.

"Clearly, the way in which we approached this election, the way we made this election more about Parliament than the state is something that has cost us...," he said.

Omar said the defeat in the Lok Sabha polls was not the end of his party and they would bounce back.

He said it is going to be a tall order for his party to bounce back ahead of the state assembly elections scheduled later this year but "it is not impossible".

"It will be extremely difficult. Lot will depend on how objective we are in taking on board the lessons that this election has taught us," he said.

Omar refused to blame Congress for the poll debacle of National Conference in the valley, saying the regional party has failed to retain the assembly constituencies represented by its leaders.