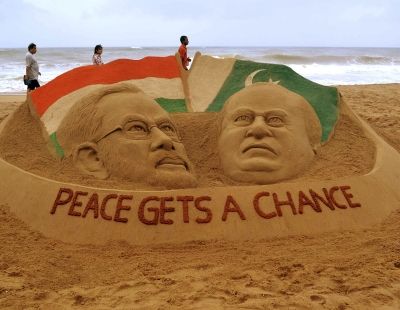 Prime Minister-designate Narendra Modi’s handing out invitations to the heads of the South Asian Association for Regional Cooperation nations to be part of his swearing-in has been welcomed by the majority.

Though his invitations to the Sri Lankan President Mahinda Rajapaksa and Pakistan Prime Minister Nawaz Sharif have raised protests in certain quarters, that did not force him into changing his mind.

Former chief of the Research and Analysis Wing C D Sahay, who was a part of the Vajpayee regime, speaks to Vicky Nanjappa/Rediff.com about Modi’s move. He says Modi has sent across a very strong message to the states that they may have their concerns, but not the last word on foreign policy.

Modi has managed to send across a very strong message by inviting the leaders of SAARC nations. Regarding Pakistan, one must not view this case in isolation since it is also part of SAARC. Modi has only extended his election slogan, ‘Sab ka saath, sab ka vikaas’, to the rest of the SAARC nations,” he says.

“He has put new life into an organisation such as SAARC and has conveyed the message that all SAARC nations need to develop, survive and prosper together. Many have tried and painted Modi in a negative manner. He was no doubt aggressive during his campaign, which was needed to effectively throw out an existing party which had been ruling since the past 10 years,” he adds.

“However, once the elections were done, he was clear-headed and wanted to send out a clear message. The invitation to SAARC nations was a masterstroke, because in one go, he sent a message of how there is a need to develop and prosper together for the entire region,” Sahay says.

“According to me, Modi is very clear where foreign policy is concerned. States have expressed their concerns over invites being sent out to some leaders, for example Tamil Nadu Chief Minister Jayalalithaa over Rajapaksa, but it is not the last word. Foreign policy is completely under the jurisdiction of the Centre, and by not budging, Modi has proved just that. I am glad that he did not allow the states to have the last word on foreign policy like the United Progressive Alliance did,” he says.

“The UPA allowed states to have the last word, and this was not in the national, but in political interest. Taking shelter under the pretext that they need to keep the allies happy when it comes to such matters is hardly even an argument. (Former prime minister Atal Bihari) Vajpayee had similar compulsions, but he never allowed the states to have the final word. When it came to extending a hand of friendship to Pakistan, he went ahead despite some allies causing trouble. If you let states decide foreign policy, then there would be chaos. Kashmir and Punjab cannot decide what our relationship with Pakistan should be, and similarly, Tamil Nadu cannot dictate terms on what relationship we ought to have with Sri Lanka,” he adds.

“The Union government will speak on these issues while keeping the concerns of states in mind. The states should understand this and resist from going all out on such issues. They need to bear in mind that it does not paint a good picture of the country to the outside world,” Sahay says.

"Much was made of Sharif’s delay in accepting the invitation. Sharif is not a Nitish Kumar whom you can ring up and ask to come down. He is the head of a country and there is a due process needed before a confirmation can be given,” he quips.

“I consider this to be a positive development. Modi packaged it as a SAARC invite.  It was wise on Sharif’s part to accept it, and his visit would ensure the proverbial breaking of the ice. It will now not be difficult for Modi to tell the officials to talk about the issues with Pakistan. Such talks will only build the ground for summit-level talks. In the past 10 years, the heads of the nations would meet with no adequate background talks and this ensured the failure of talks. You need to build up a channel for talks to succeed. Do not expect Modi and Sharif to sit in New York and decide on Siachen. Overall a very positive development and it has created a good atmosphere, or shall we say provided a right start,” he concludes.