Kejriwal announces decision to take on Modi in Varanasi 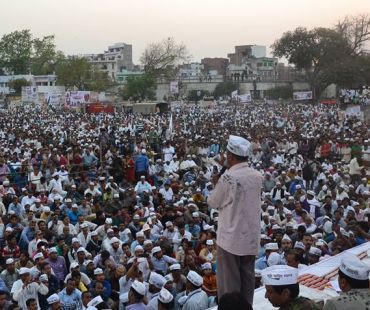 Arvind Kejriwal on Tuesday announced his decision to take on Narendra Modi in the upcoming Lok Sabha elections in this temple city while appealing for support to defeat the Bharatiya Janata Party’s prime ministerial candidate.

The Aam Aadmi Party leader made the announcement at a rally in Varanasi on Tuesday evening after a day-long roadshow around the city during which an egg and ink was thrown at him at two places.

While declaring his candidature, he attacked Modi, accusing him of being an "agent" of industrial houses and said that a myth had been perpetuated about the development in Gujarat.

He also targeted Rahul Gandhi, saying the 'shahenshah'(emperor) of Congress was also like Modi.

Kejriwal, who had declared earlier that he would contest against Modi from wherever he is fielded, announced his decision after seeking the views of his supporters at the rally in his typical style.

"I want to ask you whether I should contest from Varanasi against Narendra Modi. I am ready to accept this challenge," the former Delhi chief minister announced after a day-long road show in this constituency of Uttar Pradesh.

"Why do I want to contest from Varanasi, it is because at a time when leaders look for safe seats to fight elections, I take on them to defeat them," he added.

Attacking Modi, Kejriwal said that a myth about Modi having developed Gujarat was being perpetuated by a section of media while in reality the BJP leader was gifting away farmers' land to industrialists and followed policies which were against small businessmen.

Kejriwal appealed to people to ensure that Modi loses from Varanasi and Rahul Gandhi gets defeated from Amethi so that both the NDA and the UPA receive a jolt.

"These are both armies -- one named UPA and another named NDA. While Rahul Gandhi is the 'shahenshah' (emperor) of the UPA, Modi is the same for NDA. If you defeat both Rahul and Modi, then these armies will automatically be crushed," he said.

The AAP leader said a vote for Modi would mean that prices would rise manifold, farmers would lose their land leading to suicides, small and medium scale industries would shut down. He said he was saying this on the basis of what he had seen in Gujarat.

"Whosoever wins, the control is in Ambani's hands," Kejriwal alleged. He claimed that when he, as Delhi chief minister ordered an FIR against the industrialist Mukesh Ambani, the Congress and BJP opposed.

Hitting out at BJP for trying to project him as a "bhagoda" (escapist), he said he had quit the Delhi chief ministership because of principles.

Quoting examples of King Harishchandra and Lord Rama from Hindu mythology, Kejriwal said the BJP had no idea what sacrifice for the sake of principle is.

Suggesting that his resignation as chief minister on the issue of Lokpal would benefit AAP, he said the party will get up to 50 out of 70 seats when the next Assembly elections are held.

Kejriwal attacked the UPA, saying that during its ten-year tenure, it had looted the country more than even what the British had done in 200 years.

The AAP leader said that BJP had become desperate in its mission to win 272 seats and had joined hands with leaders like B S Yeddyurappa, Sriramulu and Ram Vilas Paswan.

Giving Modi a chance would essentially mean a chance for these politicians, he said.

He also questioned BJP over its understanding with Shiv Sena and MNS in Maharashtra and asked whether Modi would protect people from UP and Bihar in the state.

Kejriwal welcomed the Election Commission's move to ask government to defer notifying doubling of price of the fuel produced by companies such as Reliance Industries till general elections are completed.

He said that if the people do not vote for the right people, they would themselves be responsible for the price rise.