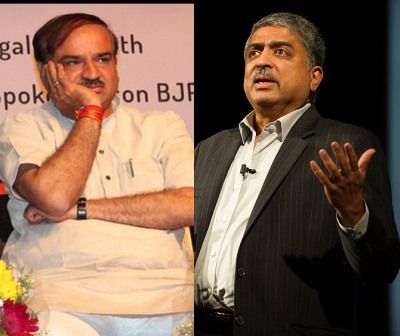 One of the many contrasts that Kumar versus Nilekani highlights is that of a traditional career politician as against a highly successful professional entering politics for the first time. Rupa Subramanya reports

"I am a unique candidate, not a unique identity candidate," quipped Ananth Kumar, taking a dig at Nandan Nilekani, as we finished our conversation. Kumar is the five-time incumbent Bharatiya Janata Party member of parliament for Bangalore South, and Nilekani, one of the founders of Infosys and architect of the unique identity card known as Aadhaar, is his principal opponent, contesting on a Congress ticket.

Some are calling the race in Bangalore South a landmark contest in a national election widely considered to be the most important in a decade, if not longer. While most observers see it as a two-horse race between Kumar and Nilekani, the Aam Aadmi Party is fielding Nina Nayak, a prominent child rights activist. Nayak is campaigning on issues identified by the AAP as national priorities -- principally fighting corruption and increasing transparency in governance.

What has turned this into a tight contest, and the subject of much media attention, is the entry of Nilekani, who enjoys something of a cult status both locally and nationally for helping make Infosys one of the largest and most successful information technology companies on the planet.

One of the many contrasts that Kumar versus Nilekani highlights is that of a traditional career politician as against a highly successful professional entering politics for the first time.

On a recent visit to his campaign office in the leafy Bangalore neighbourhood of Jayanagar, one would have been hard-pressed to tell if one was stepping into a political campaign headquarters or an infotech start-up. Trendily clad young people clutching Macs and iPads flitted about while Nilekani, casually attired in a bush shirt, sat on a couch going over campaign documents.

Down to earth and relaxed, Nilekani seems nothing like the Delhi-centric Congress politician who normally would be clad in white khadi and surrounded by a phalanx of bowing and scraping hangers-on. Instead, his young campaign team members exchange jokes with him as they go about their business, with none of the usual sense of hierarchy or pomp and circumstance.

Nilekani is running a modern campaign that he says will revolutionise the way elections will be fought in the future. His team has created apps to identify voter characteristics down to the booth level, which when married to "big data" analytics will better help his team target potential swing voters. His team plans to make these apps freely available after this election, so candidates elsewhere can use them as well. What is more, using publicly available data, he sent out a personalised letter in English and Kannada to every household in the constituency, spelling out his accomplishments and inviting voters in the household to support a "clean and capable candidate".

By contrast, while Kumar is accessible, gregarious and down to earth, his campaign methods are more traditional. He does have a presence in social media, but the thrust of his approach is to deploy the party's well-oiled local machine to get out his message and get out the vote.

The contrast is not only in styles but also in the message that each candidate is putting out to the voters.

Unlike a career politician, who for better or worse has to campaign on his party's record, Nilekani has chosen to focus on his personal accomplishments, which only tangentially relate to the Congress. He emphasises three things: His record as an entrepreneur at Infosys; his involvement with the Bangalore Agenda Task Force, a group of experts tasked by former Karnataka Chief Minister S M Krishna to work on civic issues; and most recently for spearheading the conception and implementation of Aadhaar.

Striking by its absence from what Nilekani talks about on the campaign trail or in interviews is the legacy of the incumbent United Progressive Alliance government, apart from its support for the Aadhaar initiative. Nilekani has chosen deliberately to make his campaign about local issues such as water, sewage and infrastructure, and his own personal accomplishments.

By contrast, the entrenched incumbent has focused on the national-level election and emphasised that a vote for him would be a vote for Narendra Modi as prime minister. Several residents who plan to vote for Kumar cite this as their explicit reason for wanting to vote for him, even though they are not necessarily enthusiastic about Kumar as an individual candidate. For his part, Kumar claims that the three main election issues on which he is campaigning, all national, are economics, governance and security, and that voting for him will help improve on all of these if the BJP comes to power at the Centre.

What makes this contest so compelling is that everyone, including his political opponents, agrees that Nilekani is an appealing candidate with a clean and untarnished record. One BJP functionary, asking not to be named, even described him as the "right candidate in the wrong party". And, there's the crux.

Nilekani's undoubted personal charisma as a candidate runs up against widespread discontent with the Congress-led UPA government. This poses a dilemma for many voters in the constituency who like Nilekani as an individual but are hungry to see change at the Centre and are tired of a Congress in the grip of the Nehru-Gandhi dynasty.

Nilekani supporters try to counter this logic by suggesting that a vote for him is also a vote for getting good people into politics and for long-term structural change within the Congress.

But how will that change happen, given that there are already good people in the Congress, if the levers of power are still controlled by one family? I asked Nilekani.

He pointed to reforms that would make the party more democratic and accountable, such as Rahul Gandhi's innovation of holding primary elections in a handful of constituencies across the country. Another reform would be to increase inner-party democracy in matters such as the selection of office-bearers. While many observers might be sceptical, Nilekani is convinced that Rahul Gandhi is committed to reforming the Congress.

On April 17, the voters will decide whether they buy into what Nilekani sees as a bright future for a Congress peopled with a new breed of MPs such as himself or whether what matters most right now is punishing an incumbent government that is widely perceived as inept and corrupt.

Or might voters want to have their cake and eat it too, by voting in Nilekani but hoping that Modi and the BJP will form the government at the Centre?