First-time voter Pujara to exercise his franchise despite IPL 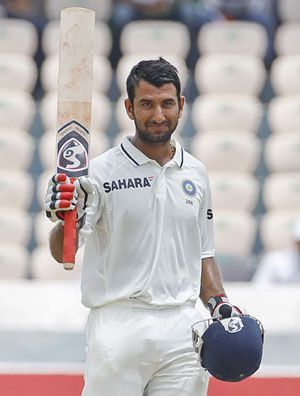 Star batsman Cheteshwar Pujara, who has been appointed brand ambassador by the Gujarat State Election Commission to encourage more voters, will exercise his franchise when the voting for the parliamentary polls take place in the state on April 30.

Pujara, who will be busy playing in the Indian Premier League in the Gulf for his new team, the Kings XI Punjab when the elections are held in Gujarat, has written to his franchise to make arrangements, and allow him to return to Rajkot, where he lives with his wife Puja and father Arvind Pujara, so he can cast his vote.

"Since Pujara is the brand ambassador for these elections, he wants to set a personal example by casting his vote regardless of his busy cricket schedule," said the Rajkot district collector and chief election officer Rajendra Kumar.

"He has asked his IPL franchise to make arrangements for him for this particular purpose," said Kumar.

Luckily for Pujara, there is no scheduled match for the Kings XI Punjab on April 30. His team meets his former IPL team Royal Challengers Bangalore at Dubai International Cricket Stadium on April 28. Incidentally, this is the first time that Pujara, 26, would be voting. He has never exercised his franchise in any election since becoming eligible, because he was either busy playing away from home or travelling.

Pujara has not charged any fee for becoming the state ambassador. “He has willingly agreed to offer his services so that his name could attract more and more voters and not just the younger ones,” said Kumar.

The right-handed batsman first played for the Kolkata Knight Riders and then the Royal Challengers Bangalore in the IPL. Pujara, who has been a regular feature of India’s test team, but not one-day squad and is yet to figure in any Twenty20 international match, has already expressed his desire to open the innings for Kings XI Punjab with the explosive Virender Sehwag.

"Things will get easier for me if I am opening the innings with Sehwag," he was recently quoted as saying.

"He is the kind of a batsman who can change the game easily. If he gets going, he can score a 100 even in a T20 format. If I am opening the innings with him, it will be a very good experience."