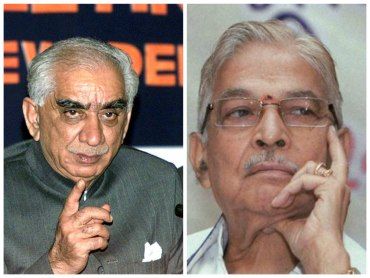 “There is no doubt we are fighting with our backs to the wall but these political bonfires in the BJP will help to consolidate our position to some extent,” a senior Congress leader tells Rediff.com’s Anita Katyal.

Going into next month’s Lok Sabha election as an underdog, a beleaguered Congress is drawing cold comfort from the growing dissension in the Bharatiya Janata Party.

Ever since the process of candidate selection got underway, there has been incessant focus on how the Congress leaders were opting out of the electoral race as the party is facing its toughest challenge in the coming general election.

On the other hand, a confident and resurgent BJP has been adding to its list of partners even as the number of people joining its ranks has been steadily growing.

It is against this backdrop that reports about discord in the BJP have come as a measure of relief for the grand old party. Although the Congress realises that the angry outburst by rebel leader Jaswant Singh or Murli Manohar Joshi, L K Advani and Sushma Swaraj’s show of resentment will not eventually amount to much, it feels these tantrums will temporarily dilute the prevailing “feel good” factor working in favour of the saffron party.

While other senior leaders did not go public with their grievances, Jaswant Singh made no attempt to disguise his anger. Filing his nomination papers as an Independent candidate from Barmer in Rajasthan on Monday, he lashed out at the BJP leaders for letting him down.

Not only did he hit out at his bete noire Rajasthan Chief Minister Vasundhra Raje, who was instrumental in denying him the Barmer seat, and party president Rajnath Singh, Jaswant Singh launched an equally scathing attack against BJP’s prime ministerial candidate Narendra Modi.

Drawing attention to the constant chants of “NaMo NaMo”, the angry leader said this kind of a personality cult will harm the party. "This NaMo, NaMo drama and the style of decision-making will be destructive for the party," he underlined.

The Congress is drawing solace from the fact that the BJP’s distribution of tickets has led to angry protests as a result of which, the electoral prospects of the grand old party have improved marginally in some states.

For instance, Congress leaders pointed out that while Jaswant Singh’s revolt may not help him personally but it could alienate the powerful Rajput community in Rajasthan where the BJP was hoping to sweep the Lok Sabha polls after its spectacular performance in last year’s assembly elections.

“ There is no doubt we are fighting with our backs to the wall but these political bonfires in the BJP will help to consolidate our position to some extent,” a senior Congress leader told Rediff.com.

Congress strategists pointed out that the party’s position has improved marginally in both Madhya Pradesh and Rajasthan primarily because of the BJP’s poor selection of candidates.

“We were facing a virtual wash-out in these two states after our disastrous performance in the assembly polls but the situation is not all that bleak now,” a senior Congress leader pointed out, adding that the party is now in contentions in several seats like Ujjain, Jabalpur and Ratlam.

In addition, its senior leaders like Kamal Nath, Jyotiraditya Scindia and late Arjun Singh’s son Ajay Singh are also well placed. Similarly, reports about angry protests by BJP workers from Chandigarh, Bihar and Uttar Pradesh over distribution of tickets are predictably being welcomed by the Congress.

The initial despair in the Congress has given way to some hope after senior leaders like All India Congress Committee general secretary Ambika Soni, former Punjab chief minister Amarinder Singh and Union Health Minister Ghulam Nabi Azad went against the tide and decided to enter the electoral fray.

While describing the developments in the BJP as a typical case of a “generational change” in the party, Congress insiders are also hoping that the BJP’s ideological mentor, the Rashtriya Swayamsevak Sangh, will rein in Narendra Modi as the ongoing election campaign has become increasingly Modi-centric.

“The RSS has backed Modi for the prime minister’s post but it will not tolerate it if he acquires a large-than-life image,” remarked a senior Congress leader while pointing out how the RSS had only recently taken strong umbrage to the chants of “NaMo NaMo” take precedence over slogans favouring the party.

This and the ongoing BJP campaign is a clear indication that despite the RSS, this election is all about Modi, an expert said.