Chetan Bhagat: I was asked to contest by all parties 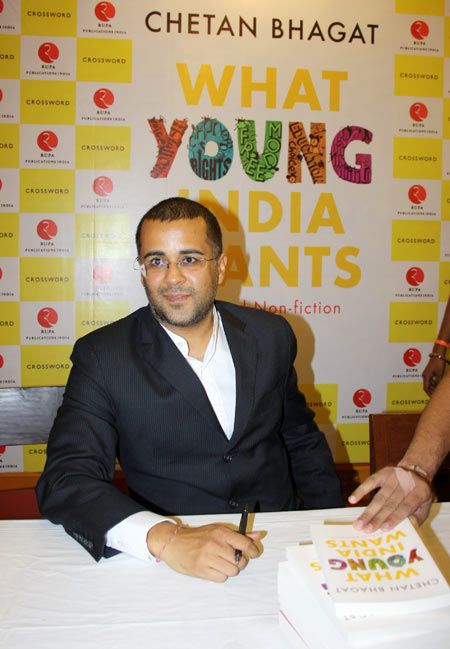 'I wish I could find a party that could offer the best of the three parties,' best-selling novelist Chetan Bhagat tells Rediff.com's Aseem Chhabra in New York.

And what is it that he wants to change in India, I asked Chetan Bhagat after we had spoken about 2 States, the film based on his bestseller, that releases this week.

"As most NRIs notice -- and I was an NRI also -- there is little liberal thought in India."

"I want economic growth and liberal ideas for India. I want my readers to be aware of politics."

Ah, he used the word "politics," even though his UTV handler (UTV is distributing 2 States) had told me not to go beyond the topic of the film.

So we can talk about politics, I ask Bhagat. He sort of agrees, as long as we do not mention political parties.

Bhagat lives in Mumbai and elections are scheduled in the city on April 24. I ask him if he has decided which party he will vote for?

"Yes I have," he says. "I think most people in India have already made up their mind. There are very few people who will make last minute decisions."

All the political parties in India, he adds, have gray shades so his vote will go to one that is slightly less gray than the others.

"I wish I could find a party that could offer the best of the three parties," he says.

I ask him if he has any political ambitions. Does he believe he can make the change by being in politics, after his successful novels, columns, lecture tours and writing scripts of Kai Po Che and the Salman Khan starrer Kick?

And what about the talk that he will be nominated to the Rajya Sabha after the elections, and the near certain win of the Bharatiya Janata Party, led by Narendra Modi?

He dismisses the Rajya Sabha talk. "I have wondered what my next role will be," he muses.

But for the time being he plans to continue on the same course.

He is writing another novel. And he says his voice has more value outside the political arena.

"I was asked to contest elections by all the political parties," he says.

But he seems to prefer his current state.