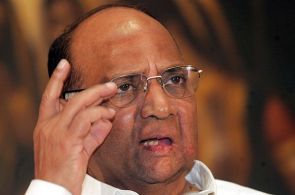 Bharatiya Janata Party looks set to emerge as the single largest party in the Lok Sabha polls but National Democratic Alliance will fall short of the magic figure to form government, Nationalist Congress Party chief Sharad Pawar said, in remarks that may not go down well with the ruling UPA.

“As things stand now, BJP looks set to improve its previous tally. As on today, major parties which will get good numbers are BJP and Congress. It looks like BJP will improve its position although they (the NDA) may not be able to get to that magic number,” Pawar told reporters.

The NCP's position will also improve, he claimed. Asked if NCP, which now has eight Lok Sabha members, would get into double digits, Pawar said, "Of course, we will get the number."

Pawar also attacked BJP's prime ministerial nominee, saying former prime minister Atal Bihari Vajpayee's stature was much higher than Narendra Modi and during his tenure the minority community felt safe. "There was a feeling of relief among minorities as far as Vajpayee was concerned. I don't see the same feeling towards this candidate."

Asked if his projection of the rise in BJP's tally was due to "Modi's strong leadership or Rahul Gandhi's weak leadership", he said, "I have not seen electronic media giving such space to one individual."

In this poll, the RSS has put up its whole set up behind the BJP, Pawar said.

Pawar also took a dig at Modi over his knowledge of Indian history.

"It is unfathomable that one who aspires to lead the country isn't aware of India's history," Pawar said.