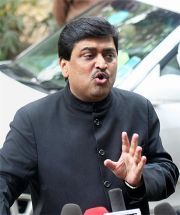 Hitting back at Narendra Modi, former Maharashtra Chief Minister Ashok Chavan said the Congress party wanted him to contest the Lok Sabha polls from Nanded due to the anti-incumbency factor and that he had the backing of his family including sitting MP and brother-in-law Bhaskarrao Patil.

"They (my family) are with me (for campaigning). I was surprised over his (Modi's) remarks. The sitting MP from here himself said he does not want to contest (the polls). Party took the decision considering the anti-incumbency factor," Chavan told select journalists at his residence in Nanded.

"I was consulted by the party high-command before taking the decision (on giving the ticket)," he stated.

The Bharatiya Janata Partuy's prime ministerial candidate, in a rally in Nanded on Sunday, had tore into Congress' decision to field Adarsh Housing scam accused Chavan and also alleged that he "snatched" the Nanded Lok Sabha seat from his brother-in-law.

“Does anybody snatch away the right of a sister? One should instead give something to the sister and should not loot her," Modi had said.

Chavan also slammed the allegations levelled against him in the Adarsh scam and blamed the media for deliberately creating a perception on the issue.

"Unfortunately, things have gone to a low level. Deliberately, a perception is created by the media. Some (mediapersons) are hand in glove with some politicians who cannot win (the elections). Things have gone to a micro-level. Accidents cannot be called as malafide intentions. One has been branded as a criminal," he said.

He also took on the BJP for the coffins scam and said, "It was one of the biggest scams...it took place during the NDA regime."

Chavan said the Adarsh scam would not hamper his poll prospects.

"It (Adarsh) is not an issue. What are you talking about Kargil...the Justice J A Patil commission report on the scam has made crucial findings and one of them is that the land belonged to the state government and not to the Centre. The Opposition will not be able to score on the issue," he said.

Unfazed over the show of strength by the BJP in the 'Mahayuti' rally addressed by Modi, which saw the attendance of approximately one lakh people, Chavan said, "If not here, then where else would he go? We were expecting him (here). I don't feel any threat from the rally."

"I don't see Modi wave anywhere in Maharashtra," he said.

To a query that Congress has paved way for his rehabilitation by giving him the Lok Sabha ticket, he said, "My personal rehabilitation is not an issue. Our aim is to win. I was much comfortable in the state (affairs). My priority is my party."

On silence maintained by Chief Minister Prithviraj Chavan on party's decision to field him from Nanded seat, Chavan asked, "Why is there a need for anybody to talk when the central leadership has taken the decision,?".

On alleged discontent within the party over the Nanded issue, Chavan, without taking names, said that some "disgruntled internal elements" have been snowballing this issue again and again and are trying to eliminate him politically. "I will speak on it elaborately after the elections," he said.