A potpourri of political parties are in the fray in Goa.
Aslam Hunani gives us a glimpse of the contestants. Illustration: Uttam Ghosh/Rediff.com Parrikar has addressed more then 30 Vijay Sankalp rallies across Goa, and there is talk that he will abandon his office in New Delhi's South Block after the election for a perch in the state secretariat in Panaji.

Not surprisingly, the Congress campaign is in some disarray with Congress General Secretary Digvijaya Singh -- the man who calls the party's shots in Goa -- at loggerheads with state Congress boss Luizinho Faleiro.

The disagreement is over the number of seats the Congress will contest.

After declaring it would contest 36 seats, leaving four for its ally, Goa Forward, the Congress has now fielded 37 candidates including a nominee for the Fatorda seat, which it had left for Goa Forward mentor Vijay Sardesai earlier.

Another Congress ally, the Nationalist Congress Party, is contesting the election separately and has announced a roster of 18 candidates.

The Maharashtrawadi Gomantak Party, a BJP ally, is flying solo too.

The MGP has fielded 26 candidates, the other seats will be contested by its partners, the Shiv Sena and the Goa Suraksha Manch, which is led by Subhash Velingkar, a Rashtriya Swayamsevak Sangh rebel.

The Aam Aadmi Party, a debutante in Goa politics, is projecting Elvis Gomes, a former inspector general of police, as its chief ministerial candidate.

How the parties fared in the 2012 assembly election

IMAGE: The map shows the constituency-wise victors in 2012.

After the 2007 assembly election, the Congress formed the government with the support of the NCP and the Save Goa Front.

The Congress won 16 of the 32 seats it contested; the NCP and SGF won 3 and 2 seats respectively. 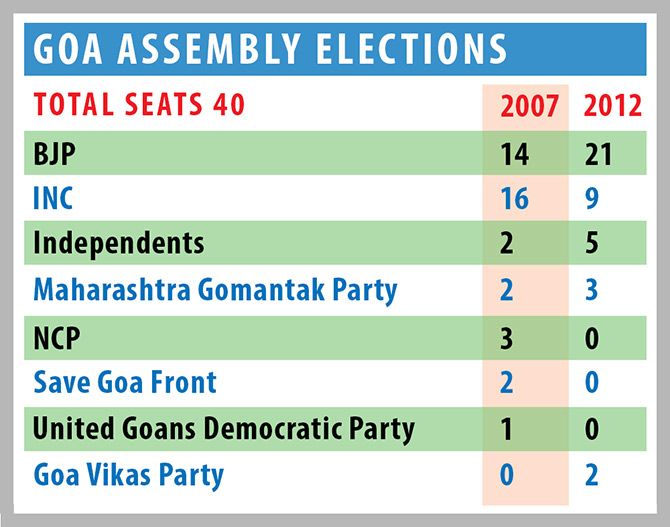 Infographic: Seats won by the major parties in the 2007 and 2012 assembly elections. Design: Uttam Ghosh/Rediff.com

Women in the Goa assembly

Women constitute about 49.32 per cent of Goa's population.

The state is also seen as being progressive and women-friendly, has a high literacy rate and per capita income among women.

Jennifer A Monserrate, the Congress MLA from Taleigao, was later joined by the BJP's Alina Saldanha who won a by-election after her husband, Jose Matanhy de Saldanha, a sitting MLA, died.

Four women were elected MLAs in the 1994 election -- Kakodkar of the MGP, Congresswomen Sangeeta Parab and Fatima D'Sa and Victoria Fernandes Romeo, an Independent.

Mrs Kakodkar -- whose brother Siddharth Bandodkar was once married to actress Leena Chandavarkar; he died mysteriously -- will not contest this election. She passed into the ages last October.