Long wait at crematoriums in Gujarat amid COVID-19 surge

Relatives of COVID-19 victims as well as those who died of other ailments are forced to wait for hours for performing the last rites as many crematoriums in Gujarat are witnessing a huge rush since the last one week. IMAGE: Ambulances, carrying the mortal remains of those who died of COVID-19, stand parked outside a crematorium. Photograph: PTI Photo

Though Hindus generally do not cremate the dead after sunset, many of them are left with no option but to perform the last rites of the deceased at night in view of the rush of bodies at various crematoriums, officials said on Thursday.

Two days back, around 25 bodies were cremated simultaneously on wood pyres at night in a crematorium in Umra area of Surat city.

In Vadodara also, people were forced to cremate the deceased during night due to the huge rush at some crematoriums, Vadodara Municipal Corporation's standing committee chairman Hitendra Patel told PTI.

To tackle the situation and reduce the waiting period, authorities have added metal pyres in some crematoriums and also started defunct facilities.

In Ahmedabad city, relatives of some of the deceased claimed they had to wait for over eight hours for cremation.

Huge rush was seen at Vadaj and Dudheshwar crematoriums, two of the major facilities here, in the last couple of days.

A person, who had to stand in a queue on Tuesday to attend the last rites of a relative at the Vadaj facility, told reporters that seven bodies were brought to the crematorium between 8 am and noon.

"All had to wait for their turn," he said, adding that though he arrived early in the morning for the cremation of his relative, their turn came in the evening.

People are facing similar problems at the crematorium in Dudheshwar area of Ahmedabad.

Jaydeepsinh Parmar, relative of a COVID-19 victim, said first they had to wait for an ambulance to bring the body to the crematorium and then for another eight-nine hours for the last rites.

"On an average, everyone is waiting for eight to nine hours," he said.

"Earlier, we had permitted four crematoriums in Vadodara city to handle bodies of COVID-19 patients. Now, looking at the rush, we allowed another eight crematoriums two days back," he said.

Patel said in seven crematoriums, where there has been a huge rush, they have installed 35 additional metal pyres, on which bodies are placed along with wooden logs.

"We have also supplied 75 additional metal trays for the collection of ashes under the pyres. This will speed up the cremation process," he said.

With this, the waiting period has come down significantly, he added.

In Surat, two new crematoriums have been operationalised to ease the burden on three major facilities, including the city's oldestAshvini Kumar Crematorium, which handles around 90 bodies daily.

"In view of the huge rush and long waiting time, two defunct crematoriums, one at Pal and another in the Limbayat area, were opened a few days back," the crematorium's manager, Prashant Kabrawala, said.

This has reduced the waiting time from five hours to about two hours, he said. 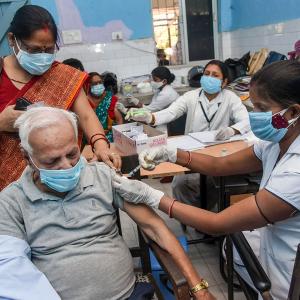