Cracking the whip on unruly MPs, Speaker Sumitra Mahajan has suspended 45 Lok Sabha members belonging to the Telugu Desam Party and the All India Anna Dravida Munnetra Kazhagam since Wednesday after they created ruckus in the House and continuously disrupted proceedings for days. 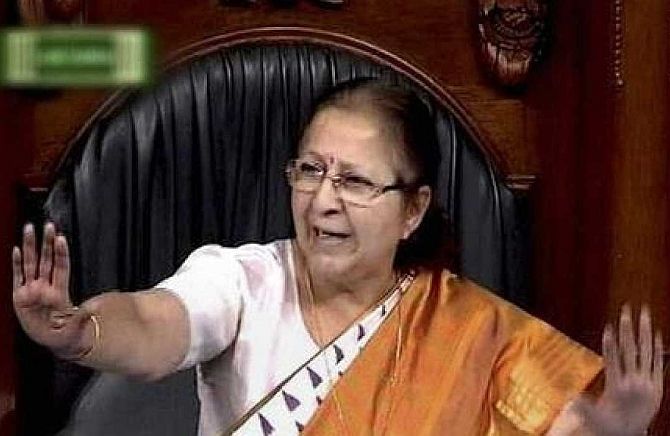 A day later, she suspended 21 members of the AIADMK, the TDP and an unattached Yuvajana Shramika Rythu Congress member.

The action was taken under rule 374A of the Lok Sabha which says they cannot attend the remaining days of the session, which concludes on January 8.

While the AIADMK has 37 members, the TDP has 15 in the lower house.

Action against such a large number of MPs is unusual. In February, 2014, the then Speaker Meira Kumar had suspended 18 MPs from Andhra Pradesh following bedlam in the House.

Those suspended then were either supporting or opposing creation of Telangana.

Proceedings in the Lok Sabha during the winter session that commenced on December 11 have been repeatedly stalled due to protests by AIADMK and TDP members over a proposed dam on river Cauvery and special state status to Andhra Pradesh, respectively.

While 19 MPs were suspended around noon on Thursday, two others were asked to leave the House around 2 pm.

As soon as the Zero Hour commenced at noon on Thursday, AIADMK and TDP members trooped in the Well, raising slogans and carrying banners.

The AIADMK members flung papers towards the chair several times. Amid the ruckus, Parliamentary Affairs Minister Narendra Singh Tomar appealed to the agitating MPs to return to their seats.

However, protests by the unrelenting members of the two Southern parties continued.

At this, the Speaker initially warned that she would be forced to name the unruly members and take action against them.

"You have come to the Well of the House and you are abusing the rules of the House by persistently and wilfully obstructing the business of the House. By your wilful and persistent obstruction, grave disorder is being occasioned. I am, therefore, constrained to name you under Rule 374A," she said.

As the members refused to budge, the Speaker suspended 11 TDP MPs, seven AIADMK members and an unattached member under Rule 374(A) for the next four sitting of the House.

"Therefore, all those Members whose names I have just read stand automatically suspended from the service of the House for four consecutive sittings in terms of provision of Rule 374A. They may forthwith withdraw from the precincts of the House," Mahajan said.

The Speaker subsequently adjourned the House till 2 pm after conducting business for nearly 15 minutes during the Zero Hour.

When the House met again at 2 pm, some members continued protest in the Well despite being suspended.

She then suspended two more TDP members for disrupting proceedings. Amid the din, the House was adjourned for the day without taking up the remaining part of debate on the Rafale issue.

Meanwhile, some pictures being shared on social media purportedly showed TDP members standing on the Speaker's podium and holding placards when the House was adjourned soon after noon.

They had not left the Lok Sabha chamber even after the House was adjourned.

Two questions were taken up during the Question Hour even as the members continued to shout slogans.

Members from the Congress wanted to raise the Sabarimala issue and Mahajan told them that the matter can be raised later.