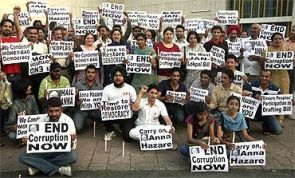 Parliament on Wednesday passed the crucial Lokpal Bill with the Lok Sabha adopting the measure as amended by the Rajya Sabha after a short discussion, amid the din created by pro- and anti-Telangana members.

Samajwadi Party and Shiv Sena members, opposing the Bill, staged a walk-out in protest, as their counterparts from other parties, including Congress Vice President Rahul Gandhi and Leader of the Opposition Sushma Swaraj, supported the measure.

Gandhi sought extension of the Winter Session to pass six more bills which were "part of the comprehensive anti-corruption framework" of the UPA government.

"Eight new central laws have been brought...We should complete the unfinished work of fighting corruption...Six anti-corruption bills are pending. If necessary, can we not extend this session of Parliament," Gandhi said as the debate began on the key bill to create an anti-graft ombudsman.

Noting that Lokpal Bill was part of this comprehensive framework, he said the RTI law was the first on the UPA list. The others which remain pending are Prevention of Corruption amendment, right to citizens for time-bound delivery of goods and services, public procurement, foreign bribery, judicial accountability and the whistleblowers bills, Gandhi said.

Swaraj supported the measure but attacked the Congress for clamouring to take credit for it, saying "the people of this country and the old man (Anna Hazare) who has undertaken fast several times deserve the credit."

Earlier, Speaker Meira Kumar allowed the bill, as amended by the Upper House, to be laid and taken up for consideration by Lok Sabha.

Law Minister Kapil Sibal said discussion on the measure has taken place over past two years both inside and outside the House. The Lok Sabha had passed it in December 2011 and urged the House to adopt the Bill returned by the Rajya Sabha along with the amendments.

The bill aimed at dealing with the menace of corruption and brings under its purview the prime minister with certain safeguards and other public servants.

Speaking on the bill, Swaraj said her party had opposed the earlier Lokpal Bill as it was a weak legislation but she was happy that the Rajya Sabha -- where the opposition is in majority -- had amended it suitably.

Rahul Gandhi said this was a chance to make history by passing the Lokpal Bill.

"RTI was UPA's most important assault on corruption. Lokpal Bill alone is not enough to fight corruption, we need a comprehensive Anti-Corruption Code," he said.

"This is about the anti-corruption framework and the framework of justice that we want to deliver to the country," he added.

SP Chief Mulayam Singh Yadav said this will bring government work to a halt as government servants will be afraid of carrying out their duties.

"It will create a fear psychosis among the bureaucracy and no official will take a decision or sign a document," Yadav said, adding that as per the law, a low level policeman will be empowered to question and investigate senior politicians and public officials.

"This is a very serious issue...Why do we need this kind of bill," he said, demanding that the bill be withdrawn and be taken after a thorough discussion in the next session of the Parliament.

"I am surprised at the Opposition's support for this bill," Yadav said and urged senior BJP leader L K Advani to oppose the Bill, as he led a walkout of SP MPs.