Lok Sabha on Thursday passed two bills relating to the agriculture sector, including the one which seek to promote barrier-free inter-state and intra-state trade in agricultural produce, amidst protests by the ruling National Democratic Alliance constituent Shiromani Akali Dal and the Opposition. 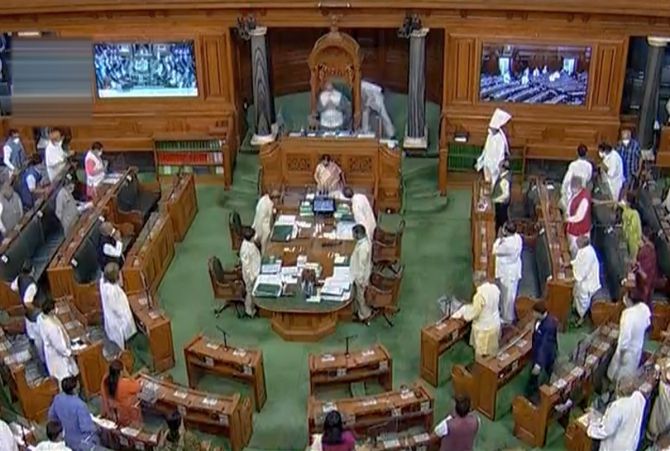 Union minister and SAD leader Harsimrat Kaur Badal resigned from the Union Cabinet to protest the two bills as well as another similar measure passed by the lower house of Parliament on Tuesday.

She was present in the House when the bills were being passed.

Kaur submitted her resignation soon after party chief Sukhbir Badal announced in Lok Sabha that she would quit the Union Cabinet in protest against the three farm bills.

The bills passed Thursday will replace the Farmers' Produce Trade and Commerce (Promotion and Facilitation) Ordinance, 2020 and the Farmers (Empowerment and Protection) Agreement on Price Assurance and Farm Services Ordinance 2020 issued in June this year.

Hailing the passage of three farm sector bills in Lok Sabha, Prime Minister Narendra Modi described these proposed legislations as historic and asserted that they will rid farmers and the farm sector of middlemen and other bottlenecks.

Modi asserted that many forces are trying to "mislead" farmers and assured the farming community that minimum support price (MSP) and government procurement of their produce will continue along with a lot of other options for them.

"These agriculture reforms will provide new avenues to farmers to sell their produce which will increase their profits. Agriculture sector will benefit from modern technology and our farmers will also be empowered," the prime minister said in a series of tweets.

These reforms will provide new opportunities to farmers to sell their produce and will lead to increased profits for them, he said.

Modi also urged farmers and those associated with the agriculture sector to listen to Agriculture Minister Narendra Singh Tomar's reply to the discussion on these bills.

Replying to the debate on these two bills amidst protest from opposition members, Agriculture Minister Narendra Singh Tomar said the bills are not going to abolish the Minimum Support Price mechanism and no one should have any doubt that land of farmers will be snatched by anyone as adequate protection of their ownership is in place.

"I assure this House with full responsibility that MSP will continue," he said.

"I assure...that the government led by Prime Minister Narendra Modi will not take any steps which is against the interest of farmers and poor. No steps will ever be taken which are detrimental to 'Gaon, Garib aur Kisan'," he said.

Citing an example, Tomar said the government has remitted Rs 92,000 crore directly in the accounts of farmers under PM-KISAN Yojana and the target of crop loan was increased to Rs 15 lakh crore from Rs 8 lakh crore.

The first bill seeks to provide for the creation of an ecosystem where the farmers and traders enjoy the freedom of choice relating to sale and purchase of farmers' produce which facilitates remunerative prices through competitive alternative trading channels to promote efficient, transparent and barrier-free inter-state and intra-state trade.

So the bill is not going to stifle the farmers but provide freedom to them to sell their produce any where in the country which is going to provide competitive price for their harvest, the minister said.

Both traders and farmers are going to benefit and help create better agriculture infrastructure in the country, he said, adding it will also create avenues for employment.

The other legislation -- the Farmers (Empowerment and Protection) Agreement on Price Assurance and Farm Services Bill -- permits a farmer to enter into a written farming agreement for supply of farm produce at a pre-agreed price.

The agreement should clearly specify the price to be paid for the purchase of a farming produce and to clear reference for any additional amount over and above the guaranteed price.

While the discussion on the two bills was taken up together they went to vote separately. The Congress, DMK and the Revolutionary Socialist Party walked out of proceedings as the bills were passed by voice vote.

Opposition parties, including teh Trinamool Congress, the Congress, the Dravida Munnetra Kazhagam and the Bahujan Samaj Party opposed the agriculture sector reform bills, saying they were against the interests of small and marginal farmers.

Participating in the discussion, TMC MP Kalyan Banerjee said his party strongly opposes them and if the "draconian" bills are passed, they will adversely affect 60 per cent people of the country who are poor and marginal farmers and farm labourers.

Banerjee said the new laws will lead to hoarding of produce and their black-marketing and the Centre has sought to take away powers of states to act against them by amending another law.

The common man will suffer and there will be price rise, he alleged.

DMK MP K Shanmugasundaram opposed the bills and stated that the government should have done away with the export restriction on agricultural commodities.

Congress member Ravneet Singh demanded that the bills be withdrawn and wondered why the Centre was interfering when agriculture is in the concurrent list.

Opposing the bills, Samajwadi Party member S T Hasan criticised the NDA government's policies towards the farmers and said that if the government has been taking welfare schemes for the farmers, why "so many farmers are committing suicide".

He claimed that the "rise of prices of the fertilisers and the diesel have enhanced the burden on the farmers".

BSP's Ritesh Pandey opposed the bills and said small and marginal farmers have been left to the mercy of corporate groups.

Biju Janata Dal's Anubhav Mohanty urged the Centre to send the bills to a parliamentary committee, saying they have been brought in very hastily.

He asked the Centre to ensure that any agreement between farmers and private parties makes it clear that farm produce will be sold at a price higher than the MSP.

YSR Congress MP T Rangaiah supported the proposed laws, saying they will enable farmers to have barriers-free trade in their produce.

Supporting the two bills, Janata Dal-United MP Santosh Kumar said the proposed legislations are "historic" and that farmers can easily access different markets for better price for their products.

Bharatiya Janata Party MP Virendra Singh Mast called the bills "historic", saying they will liberate farmers and bring in prosperity for them while helping the country become self-reliant. The proposed laws are revolutionary, he said.

BJP's Jagdambika Pal said that if the two bills are approved by Lok Sabha, then the day will be celebrated as farmers empowerment day.

With the legislations, the government is trying to give due prices of agriculture products of the farmers, he said.

Referring to agitations launched in different parts of the country against the bills, Pal said these were not farmers' agitation but agitations sponsored by the opposition Congress. After these bills become Acts, farmers will be free to sell their products at their place of choice and buyers and there will be no levy, no cess, he added.

Pal also noted that migration of youths from villages will be stopped as they will be attracted towards the farming now.