American defence major Lockheed Martin on Thursday said it has offered to move its lone production line of the latest version of fighter aircraft F 16-Block 70 to India from Texas to meet Indian and global requirement. 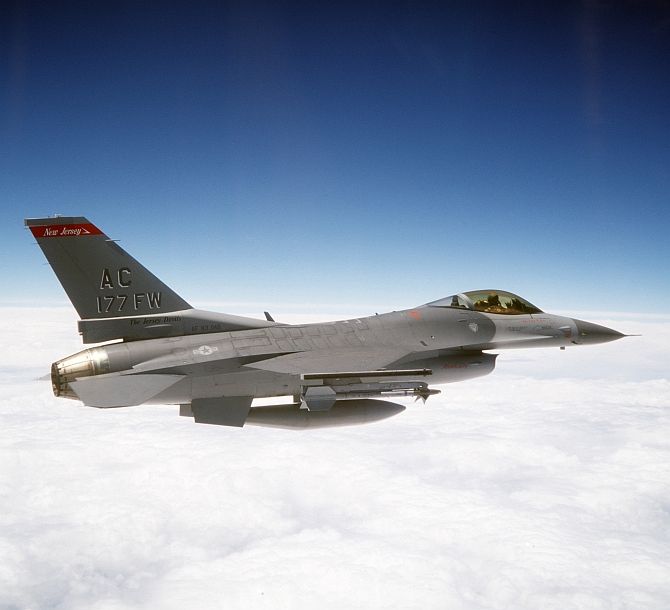 However, the company made it clear the proposal is "conditional" to IAF choosing the world's largest-sold fighter aircraft for its fleet.

"The offer we have given to the Indian government is unmatched and from our side unprecedented," Randall L Howard, F16 Business Development head at Lockheed Martin, said in New Delhi.

Interacting with mediapersons, Howard said the company wants to make F 16-Block 70 "for India, from India and export to the world".

However, he parried questions on whether the company is willing to give a commitment not to sell F16s to Pakistan saying it will be part of discussions between the Indian and American governments.

Asked if the offer to move the production line from Fort Worth to India is conditional to IAF picking up the aircraft for its fleet, Abhay Paranjape, National Executive, India said, "Yes".

He said it is conditional to assured orders from the Indian Air Force which is looking to acquire new aircraft to beef up its depleting strength.

Defence Minister Manohar Parrikar has said India will choose at least one more aircraft, besides the indigenous Tejas, for the IAF through the 'Make in India' route.

Lockheed Martin, which has sold 4,588 F16s in the world, faces competition from its American rival Boeing (F/A-18E), Dassault Aviation of France (Rafale), Swedish plane Gripen by Saab and the Eurofighter.

All the companies have offered to set up a production facility here.

"But we are offering not only moving the lone production line to India but also meeting the global requirement through the same unit here," Howard said, adding it is a "win-win situation".

Arguing the F 16-Block 70 will be the best fighter aircraft in the Indian region, he said, "It is critical for you to pick up a partner who will deliver on his promise".

Howard said the company is having multiple discussions with the government here besides the industry and "they have not been told to go away", indicating the discussions are on.

He added Lockheed believes the production in India will also bring down the cost of the aircraft which in turn will increase its global demand.

Howard did not reply to questions on the kind of investment the company plans to make in the country and whether it would be looking at a 100 per cent FDI, saying it was too early to discuss this.

He said the aim of the company right now was to give maximum data to the government and the IAF so they can be helped in making an informed decision.

The company termed India as the "new epicenter of the world's most extensive, industrial defence network".

Company sources said besides catering to India's demand, they are also looking at a potential export order of another 100 aircraft.

Lockheed officials said the US Air Force will continue to fly F16s for decades to come.

They added the new avionics configuration is the largest leap in F16 combat capability and represents the most significant F16 upgrade till date.