The Lok Janshakti Party on Sunday walked out of the ruling National Democratic Alliance in Bihar ahead of the state assembly polls, as it attacked Chief Minister Nitish Kumar and announced that it would fight Janata Dal-United candidates in the elections. 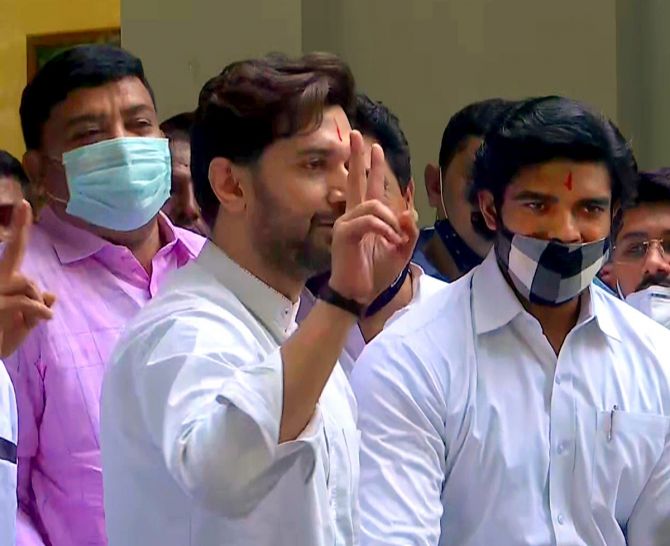 While making its resentment with the JD-U president Kumar clear, the LJP also went to great lengths to highlight its strong ties with the Bharatiya Janata Party, asserting in a statement that it wants the saffron party to head the future government in the state and its MLAs will work towards this goal.

LJP president Chirag Paswan chaired the party's parliamentary board meeting in which a decision was taken to not fight the assembly election, which begins from October 28 in three phases, under Kumar's leadership of the NDA in the state.

The BJP, which heads the NDA, has already announced that the alliance will fight the polls under Kumar's leadership, and he will be chief minister again if people vote it back to power.

'Due to ideological differences with the JD-U, a member of the alliance at the national level and in the assembly polls, the Lok Janshakti Party has decided to fight the elections in Bihar separately from the alliance,' a party statement said.

"We will triumph," was the brief comment of Chirag Paswan as he sported a victory sign after the meeting.

However, the LJP is likely to continue as the member of the NDA at the Centre as of now, more so as its patron and the only member in the Modi government, Ram Vilas Paswan, has undergone a heart surgery in the national capital and will remain hospitalised for a few weeks.

The BJP's relations with the regional party have remained cordial, and the LJP has maintained that it will not contest against candidates of the saffron party.

The LJP also said that it has no 'bitterness' with the BJP and has often lauded Prime Minister Narendra Modi's leadership.

However, the LJP's decision has thrown open new possibilities in the Bihar polls as the party may end up damaging the JD-U's prospects at several seats.

The opposition alliance of the RJD, Congress and the Left may receive a boost with the development.

The LJP meeting also passed a resolution in favour of an alliance with the BJP, and said its MLAs will work to strengthen the hand of Prime Minister Narendra Modi.

The party said it was keen to execute the 'Bihar first Bihari first' vision documents it had prepared following interactions with lakhs of people from the state but an agreement on this could not be reached in the alliance.

'We have a strong alliance with the BJP in Lok Sabha,' it added.

The LJP has said that it will contest on 143 seats in the election to the 243-seat assembly.

The ties between the JD-U and the LJP had long been worsening over a number of issues.

The JD-U was also not keen to part with as many seats as the LJP believed was its due in the assembly polls, and Chirag Paswan's constant attack on the Nitish Kumar government in the state soured their ties.

The JD-U had refused to engage in any talks with the LJP, saying that Paswan's party's alliance was with the BJP and not with it.

Though the BJP was more accommodative of the LJP's concerns, sources in the regional party said, but the JD-U believed that it overestimated its strength.

The LJP primarily draws its vote bank in the state from a section of Dalits and also has several 'upper' caste leaders in its ranks who command influence in certain pockets.

The nomination process for the first phase, under which 71 of the total 243 seats will go to polls, began from October 1 and will end on October 8.

The JD-U was then part of the opposition alliance which decisively defeated the NDA.