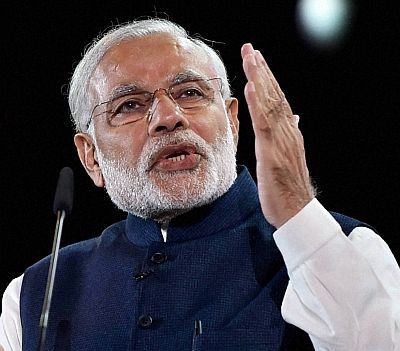 An intricately carved gateway, built at a cost of over $1 million and representing hundreds of years of Buddhist and Islamic art forms in India, will be inaugurated by Prime Minister Narendra Modi in 'Little India' in Kuala Lumpur during his visit to Malaysia this week.

The prime minister, who will be in Kuala Lumpur on November 21 to attend the Asean-India and East Asia summit, will inaugurate the Torana (gateway), on Monday.

Thousands of people are expected to throng Brickfields -- a suburb in the Malaysian capital here, popularly known as ' 'Little India' -- to witness the opening of the massive gateway, which is estimated to cost about 5 million Malaysian Ringgit (Rs 7.8 crore or $1.1 million) to build.

The suburb, largely dominated by ethnic Indians, is all spruced up and freshly painted for the visit.

The main thoroughfare in Brickfields could be a street from anywhere in Tamil Nadu.

Malaysia's Deputy Federal Territories Minister Loga Bala Mohan said: "We have started to clean and beautify the area. Notices were issued to the owners to paint their buildings to give them a fresh look."

The Torana Gate is a gift from India to mark the launch of Kuala Lumpur's Litte India project as a symbol of friendship between the two countries.

"Such detailing on an art form of this scale, involving the two disparate cultures, has perhaps not been done before."

Besides the majority population of Muslim Malays, the country also has ethnic Chinese and ethnic Indian population.