She's like my sister: Shrikant Tyagi on woman he was seen assaulting

A video has surfaced purportedly showing politician Shrikant Tyagi confessing it was a mistake to assault a woman and calling her his 'sister'. 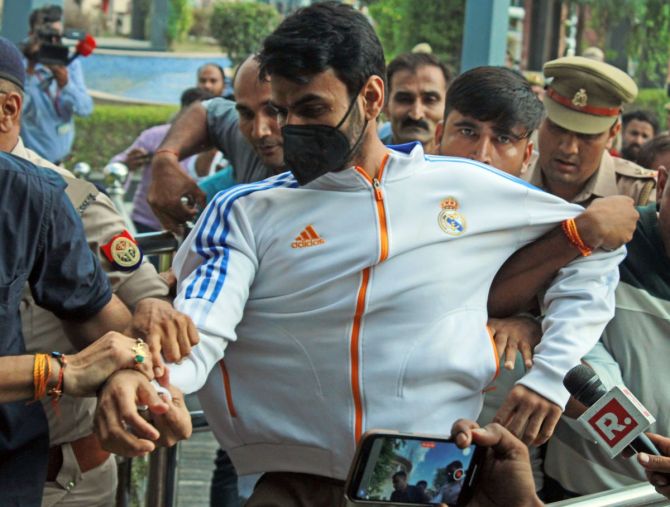 The video surfaced online after his arrest of Tuesday, but is likely to have been made before that.

Tyagi was arrested Tuesday morning from Meerut, four days after he absconded assaulting and abusing a woman with whom he had a row over planting of trees in what has alleged to be the common area of the society.

Both, Tyagi and the woman, live in the same housing society located in Sector 93B here.

Tyagi was remanded to a 14-day judicial custody and lodged into the jail Tuesday night after he was booked under the Gangsters Act, among others, according to officials.

"She is a woman and she is like my sister. Certainly it was a mistake on my part and I do realise it. If she thinks I should apologise to her, then I can do it," Tyagi is allegedly heard saying in the video.

"Whatever I said in rage to her I realised later that such language should not be used against anyone in life," he added.

He then says that the palm trees -- which were at the centre of the spat that broke out on Friday -- were being planted in the lawn in front of his ground floor apartment.

The apartment was purchased at an extra 5-6 per cent cost under the preferred location charge system by the builder of Grand Omaxe society, Tyagi claimed.

Until he went underground Friday night, Tyagi claimed to be the national executive member of the BJP's Kisan Morcha and the national co-coordinator of its Yuva Samiti, even as the ruling party denied any links with him.

The Opposition has also mounted an attack on the Bharatiya Janata Party over the issue, sharing pictures allegedly of Tyagi with senior saffron party leaders, including its national president J P Nadda.