Reeling under sweltering heat, Mumbai and its surrounding areas experienced a spell of light showers coupled with thunder and lightning on Monday morning following the formation of a low pressure area in the Arabian Sea. 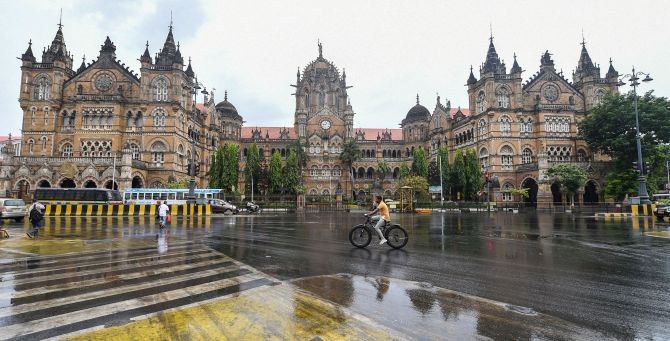 Residents of these areas woke up to a cloudy sky and light showers ahead of the arrival of the South-west monsoon in Maharashtra, and the weather remained pleasant throughout the day.

The depression in the Arabian Sea is likely to intensify into a severe cyclone and cross the north Maharashtra and south Gujarat coasts on June 3, the India Meteorological Department (IMD) has said.

The cyclone is likely to bring heavy rainfall in its wake in parts of Maharashtra, Gujarat and Goa.

The light showers/drizzle in parts of Mumbai city, its suburbs and neighbouring districts of Thane and Palghar on Monday morning brought some respite to people from the sweltering heat and humidity.

Dharavi, a slum pocket of Mumbai, recorded the highest 31.46 mm downpour in the past 24 hours, according to IMD's website.

On Sunday also, some parts of the state, including Pune, witnessed rain with thunderstorm and gusty winds.

Light rain coupled with thunder and lightning was reported in parts of the Mumbai Metropolitan Region (MMR) since 4 am on Monday. But, the rain intensity reduced considerably after 7 am in most parts of the city.

In the last 24 hours, 0.2 mm rain was recorded in suburban Santacruz and 2 mm rain at Colaba in south Mumbai, according to the IMD's website.

Chief Minister Uddhav Thackeray on Sunday appealed to fishermen not to venture into the sea in view of the cyclonic storm.

The state government has stepped up safety measures along the Konkan coast to tackle any eventuality.

Meanwhile, in adjoining Goa, people have been advised not to visit beaches or venture into the sea over the next 48 hours as the IMD has predicted heavy rainfall in parts of north and south Goa districts with wind speeds of 45-55 kilometres per hour, officials said on Monday.

An advisory about high waves in the 2.8-4 metre range was also issued by Drishti Marine, a firm contracted by the state government to provide lifeguards at beaches.

The firm said it had posted reg flags on the beaches along the state's 105-kilometre coastline, which indicate that the area is dangerous for swimming.