In an escalation of tense ties with the Congress government in Puducherry, Lt Governor Kiran Bedi on Thursday cancelled the order of Chief Minister V Narayanasamy banning the use of social media for official
communication. 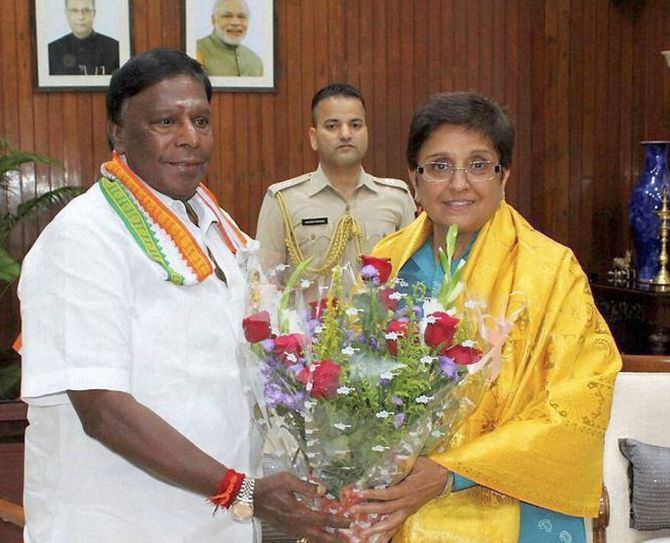 Bedi, who was in Delhi for the past few days, posted a copy of her order on her personal Twitter handle declaring the government circular "null and void" with immediate effect on the ground that it was issued "in contravention of guidelines, rules and policies of the government".

"If Puducherry has to be a progressive Union Territory it cannot be retrograde in communications. Hence @CM_Puducherry's order stands cancelled: @PMOIndia (sic)," she tweeted.

Narayanasamy had issued the circular even as Bedi was pushing with her plan to promote WhatsApp communication by officials.

The government circular dated January 2 had said the chief minister had directed all the officers, heads of departments and employees of government-owned undertakings to immediately desist from using the social media such as Twitter, WhatsApp and Facebook.

It had added that the servers of these multi-national companies were based outside the country.

"Any foreign country can get access to these official communications and documents uploaded which is a violation of the Official Secrets Act and also against the guidelines issued by Union Information Technology Ministry," it had said.

Describing the order as retrogade, Bedi said it is against the clear-cut policy of the Central government. "How can the chief minister take away the power of communication? That is why I have declared it null and void."

"I have met Union Home Minister Rajnath Singhji, IT and Communication Minister Ravi Shankar Prasad and Minister of State in the PMO Jitendra Singh and apprised them about the issue," said Bedi.

Bedi said Prasad also thinks it is a retrograde measure by the chief minister.

"It is now up to the Centre to respond. I have left it to them. It is a major issue. How can a chief minister issue gag orders in times of open communication and free flow of ideas?

"Government of India's entire grievance redressal mechanism is based on open communication. So many ministries including the External Affairs Ministry is using social media so effectively," she said.

She had recently created a WhatsApp group for exchange of information and details of implementation of various government schemes. An Officer on Special Duty at Raj Nivas is the administrator of the group.

The government's circular was seen as a counter to Bedi suspending a Puducherry Civil Service officer for posting an "obscene" video clip on the WhatsApp group.

Meanwhile, the Election Commission has stayed Bedi's December 30 order suspending the Registrar of Cooperative Societies, AS Sivakumar, said an official.

Sivakumar was appointed by the EC as Electoral Registration Officer for three Assembly seats in Puducherry.

Bedi in another round of tweets defended her order.

"Why I cancelled CM Puducherry's gag order. It takes us back to non technology days, not good for #properouspudducherry:"

In another tweet, Bedi said, "Amazing how we choose to b retrograde. Some in position of power instead of using their position of influence to facilitate, do so to obstruct."

She said "nothing in contravention of rules could be permitted as it would otherwise be replicated anywhere."

When asked whether her relations with the Puducherry government following her order can be compared with the frosty ties between the Aam Aadmi Party government and previous Lt Governor Najeeb Jung, Bedi said the comparision is unfair.

Sivakumar resumed duty as Registrar of Cooperative Societies after his suspension order was stayed, an official said.

The official added that a letter issued by the EC to the Puducherry government said Sivakumar, in his capacity as Electoral Registration Officer, "is subject to control, superintendence and discipline of the ECI under section 13CC of the Representation of People Act, 1950".

It also pointed out that "the Lt Governor ought to have taken the commission into confidence and consulted it before placing him under suspension".

According to the official, the ECI said the suspension had created a vacuum as regards the post of Electoral Registration Officer "who is currently associated with the crucial and time bound ongoing electoral poll revision process."

The official said it also directed the Puducherry administration "to stay the suspension order forthwith" and asked the government to apprise it of the allegation against Sivakumar to take a final call on whether he should continue to be as ERO or not."

A case under Information Technology Act had been registered against the PCS officer following a complaint from the officer on special duty in Raj Nivas.

Earlier, PWD Minister and Congress party state chief A Namassivayam had questioned Bedi's decision on suspending the officer. The Lt Governor had "failed to follow proper procedure while deciding action against the officer," he had said.

The chief minister has also been maintaining that there was clear demarcation of powers and subjects between the Lt Governor and the council of ministers.

"Such demarcation is seen in the Constitution of India, the Government of Union Territories Act 1963 and the Conduct of Business Rules," he has said.

Meanwhile, Bedi said that she had brought all the issues related to the Puducherry government, particularly those related to service matters of government officials, to the notice of the Centre, adding that the latter "has taken up the matter".

She said she had briefed Union Information Technology Minister Ravi Shankar Prasad on all the issues.

"The Union minister is seized of all the issues. My intention is to keep the whole administration in a fine shape," Bedi said.

She said she had declared as "null and void" and cancelled the circular Chief Minister V Narayanasamy had issued on January 2, banning the use of social media by officers for official communication, as "I should handle the administration properly and with full responsibility."

"Nothing in contravention of rules could be permitted as it would otherwise be replicated anywhere," she added.

The Lt Governor said her "responsibility as Administrator of Puducherry is to keep the administration in a fine shape as the Union Territory has a high percentage of literacy and offers a vibrant scope for development".