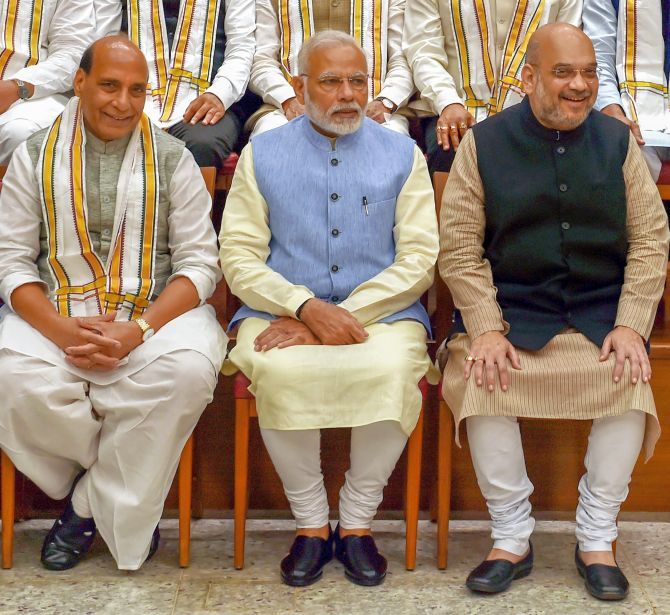 While the 2016 letter suggested that there were deliberations among the Naxals to kill Modi, Shah and Singh, the 2017 letter referred to a plan to carry out a Rajiv Gandhi assassination-type attack on the prime minister during one of his roadshows, they claimed.

The second letter was addressed to one "Comrade Prakash" and was found from the residence of a Delhi-based activist, Rona Wilson, on June 6, according to a security official privy to the development.

Along with Wilson, four others were also arrested during raids in June by police in different parts of the country in connection with the matter.

The letters were reportedly recovered after the anti-Naxal operations in Maharashtra's Gadchiroli, in which 39 Maoists were killed, in April.

The 2017 letter also referred about "senior comrades" suggesting "concrete steps" to end the National Democratic Alliance dispensation and about raising several crore of rupees to buy American M-4 rifles and some ammunition, the official said.

Tuesday's police action started at 6 am and was carried out simultaneously by Maharashtra Police, led by Joint Commissioner of Pune, Ravindra Kadam, in Ranchi, Goa, Delhi and Hyderabad.

Five persons have been arrested so far, another official said.

Searches were carried out at the residences of Arun Ferreira, Susan Abrahams and Vernon Gonsalvez in Mumbai, Gautam Navlakha in Delhi, Anand Teltumbde in Goa, Vara Vara Rao's daughter Anala and Journalist Kurmanath in Hyderabad.

Police have also confiscated during the searches several items like computers, laptop, CDs, papers and books.