'How many lives will be lost?': HC orders probe into Mumbai building crash

The Bombay high Court on Friday initiated a judicial inquiry into the building collapse incident in Malwani area of Mumbai on Wednesday, which claimed 12 lives. 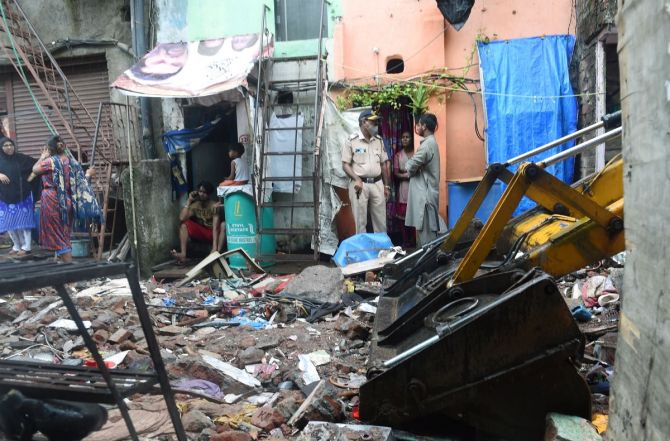 It said that the incident proved that there existed absolute lawlessness in the municipal wards in Mumbai as well as its adjoining areas.

At least 12 people, including eight children, were killed and seven others injured after two floors of a three-storey residential building collapsed on an adjoining single-storey house at Malwani in suburban Mumbai late on Wednesday night.

A bench of Chief Justice Dipankar Datta and Justice G S Kulkarni directed the inquiry commissioner to submit the preliminary report of the incident by June 24.

The bench said it had been immensely pained by the incident, in which eight innocent children lost their lives.

The court said that those in-charge of the concerned municipal ward must be held accountable.

It further noted that between May 15 and June 10 this year, four incidents of building collapse were reported in Mumbai and its adjoining areas, in which a total of 24 people died.

"What is happening? How many lives will be lost? What type of buildings are these? Were they identified as dangerous or illegal, but not demolished or were they not identified?" HC said.

"You (municipal authorities) can't play with lives of people. We have to hold those in-charge of the concerned ward responsible. Eight innocent children died on the first day of the rains," it said.

The HC said that there was no will among the civic officials to check the instances of illegal construction, or to demolish illegal structures.

"This is nothing but lawlessness. You can realise the pain we are facing due to the death of people, including innocent children," the high court said.

"This pain should also be felt by the corporators. We are shocked. This is a man-made disaster and nothing else. Every monsoon it has to happen. Why it cannot be prevented?" the high court asked.

The bench was presiding over a PIL that it had initiated suo motu (on its own) last year following an incident of building collapse at Bhiwandi in Thane district.

While the PIL was not scheduled initially for a hearing on Friday, the bench sought its production after taking suo motu cognisance of the Malwani incident.

The HC will continue the hearing on June 24.

Earlier in the day, the high court also asked the Brihanmumbai Municipal Corporation (BMC) to ascertain the context in which Mayor Kishori Pednekar had referred to a previous HC order while answering questions related to the Malwani building collapse incident.

A bench led by Chief Justice Dipankar Datta directed senior counsel Anil Sakhre, who represents the BMC, to inspect the video footage of the said conversation between Pednekar and media persons, and to inform the court of the context in which she had made the statement.

"We are not going to tolerate politics over building collapses. We have said that if a building is dangerous or dilapidated then the concerned authority should approach court for demolition,” the high court said.

"We are surprised that despite giving liberty to the corporations to approach the courts, the corporations are shifting blame on us. You do not take action against the buildings on time, and then blame is shifted on us,” the HC said.

The observations came while a full bench led by CJ Datta had assembled to extend interim orders passed by the several courts across the state till July 9.

These interim orders include a stay imposed by the high court on April 16 on evicting citizens, demolishing residential buildings etc. The stay had been granted to protect the citizens' interest during the pandemic. However, at that time, the HC had made it clear that if there was an urgency, or if a building was deemed unsafe and had to be demolished, the concerned municipal authorities were free to approach the HC to seek permission for the same.

The HC said that it had remained available 24x7 throughout the pandemic, and yet, no authorities had approached it for demolition permissions.

"Please find out what was the context of her (Mayor's) statement. Is there a video recording? Inspect the recording. If she feels her statement has been distorted, let her say so. Obtain instructions," the HC said.

BMC counsel Sakhre said,”A live interview was going on and some questions were being asked. Her answer was taken out of context.”

The HC then sought a transcript of the said interview and said it will go through it.