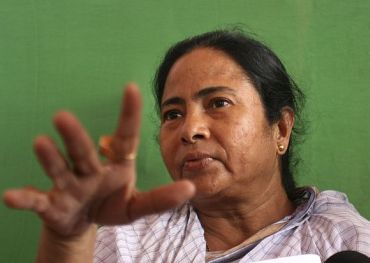 A group of protesters from Left organisations, which waited for the Trinamool Congress chief outside the commission's office, raised slogans against her when she arrived with Mitra at 3:45 pm to meet plan panel Deputy Chairperson Montek Singh Ahluwalia.

Banerjee, who was advised by police not to get down from her car and drive inside, however, chose to walk through the slogan-shouting and placard-wielding crowd into the building.

The protesters heckled Mitra whose kurta was torn in the melee. West Bengal Panchayat Minister Subrata Mukherjee and Urban Development Minister Firhad Hakim also faced the ire of the activists who were protesting the death of Sudipto Gupta, a leader of Communist Party of India-Marxist’s student wing SFI.

"You know why they are protesting. I have 10 lakh people with me. I can bring them to Delhi. They don't want development of West Bengal," she said.

Irked by the scene that unfolded outside, she complained to Ahluwalia, "You have created a new precedent. My minister was assaulted. This is scandalous. There were 20 hooligans. Can you stop development of a state like this?”

SFI leader Ritabrata Banerjee said, "Our protest is to show Mamata Banerjee that Sudipto Gupta's death was not a petty matter. People are deeply concerned about what is happening in West Bengal."

The SFI has alleged that 22-year-old Gupta died after he was beaten up by the police which has maintained that he was killed in an accident.

Banerjee had termed the incident as "unfortunate" but later called it a "petty" matter, drawing criticism from the Left.

Banerjee also lashed out at the Delhi Police for "poor arrangements". The protesters also shouted slogans against Delhi police.

The West Bengal chief minister alleged that her ministers were beaten up. "Delhi is not safe and a new precedent has been created," she said.

The SFI activists denied there was any violence. Ritabrata Banerjee said, "It was a militant but peaceful protest. We did not manhandle anyone or tore their clothes. We want a judicial probe into Sudipto's murder. We will protest everywhere Mamata goes."

Congress leader Shakeel Ahmed, who is in-charge of West Bengal, disapproved of the incident.

“While Congress party is fully with the family of the victim and is demanding an impartial inquiry into the incident, violence against any leader or anybody in a democratic set up should be condemned," the leader of Trinamool's estranged ally said.

"Nobody has the right to take the law into their hands. Obstructing leaders physically is not good," Ahmed said.

CPI-M leader Nilotpal Basu opposed violence in such protests but said Banerjee "should accept that these are public outpourings against the manner in which the students are treated under the Trinamool rule."

"She kept on saying it is a small and petty matter and refused to order a judicial probe.... Do you think that after all this, the students will shower petals on her," Basu said.

Reacting to the incident, CPI leader Atul Kumar Anjaan said he "disapproved" of the way the protest was carried out but castigated the Trinamool government in West Bengal for the death of the SFI activist.

"I want to ask what her government has done (in regard to the death case). The way her government, her administration and her police functioned, they killed the student in their custody, it is a matter of shame for all," he said.

"She (Mamata) was herself in student politics and she might have organised such protests, such demonstrations herself. She will herself have to face the wrath of the people when such a gruesome incident has occurred under her rule," Anjaan said.

Maintaining that all democratic-minded people strongly condemn the way the youth "was brutally murdered in police custody," the CPI leader said "instead of apologising and ordering a judicial inquiry, she has given a clean chit to the police."

Anjaan said in a democracy, everyone has a right to protest but it should be done in a peaceful and decent manner. Why the food security bill will NOT help the POOR
Marital rape NOT criminal offence: Parl panel backs govt 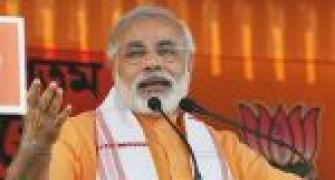 Discrimination is a charge to mask state's failure: Cong 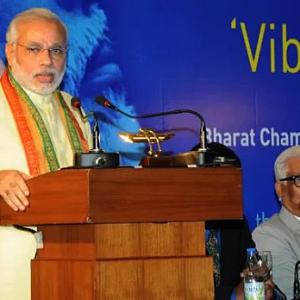