Non-BJP opposition to meet President on Tuesday with JPC plea

Source: PTI
November 29, 2010 16:10 IST
Leaders of non-Bharatiya Janata Party opposition parties, including the Left, are likely to meet the President on Tuesday to urge her to advise the government to accept their demand for a joint parliamentary committee probe into the 2G spectrum allocation issue to end the stalemate in Parliament.

Concerned over the continued disruption of proceedings in Parliament for the past 12 working days, leaders of the four Left parties, the Telugu Desam Party, BJD and the All India Anna Dravida Munnetra Kazhagam, met on Tuesday and decided to meet President Pratibha Patil.

"We have decided to meet the President tomorrow to urge her to advise the government to accept the demand for a JPC inquiry into the spectrum allocation issue and end the continued disruption of Parliament," CPI leaders D Raja and Gurudas Dasgupta told PTI.

"We have sought time from the President tomorrow," they said, adding other parties like the JD-S are also likely to join the delegation.

Patil is returning to New Delhi on Monday night after an official visit to the United Arab Emirates and Syria.

The Left parties have been insisting on their demand for a JPC probe into the spectrum allocation issue, saying no other form of inquiry into the "mega scam which has caused the exchequer over Rs 1.76 lakh crore loss" would suffice.

The Left and other non-BJP opposition parties have put the onus of proper functioning of the House on the government, saying it was the ruling coalition's responsibility to restore order by accepting the JPC demand.

Finance Minister Pranab Mukherjee has been in talks with Left leaders, including Sitaram Yechury and Dasgupta, to find a way to resolve the continued impasse in Parliament.

Meanwhile, with no solution in sight to the logjam in Parliament, Lok Sabha Speaker Meira Kumar on Monday said she has convened a meeting of leaders of all parties on Tuesday as part of her efforts to ensure smooth functioning of the House.

"I have called a meeting tomorrow. Let me see what happens. I will be trying and making an effort," Kumar told PTI in New Delhi.

Asked whether she was hopeful of ending the stalemate in Parliament, she said, "Well, yes I am."

Parliament has been paralysed for the past three weeks with virtually no business being transacted in either of the Houses, over Opposition demand for a Joint Parliamentary Committee probe into the allocation of 2G spectrum.

The ruling Congress members too have their share in derailing the proceedings in Parliament with their vociferous demands for action against Karnataka Chief Minister B S Yeddyurappa. 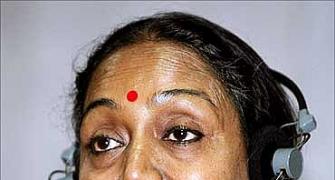 I am committed to a casteless society: Meira Kumar