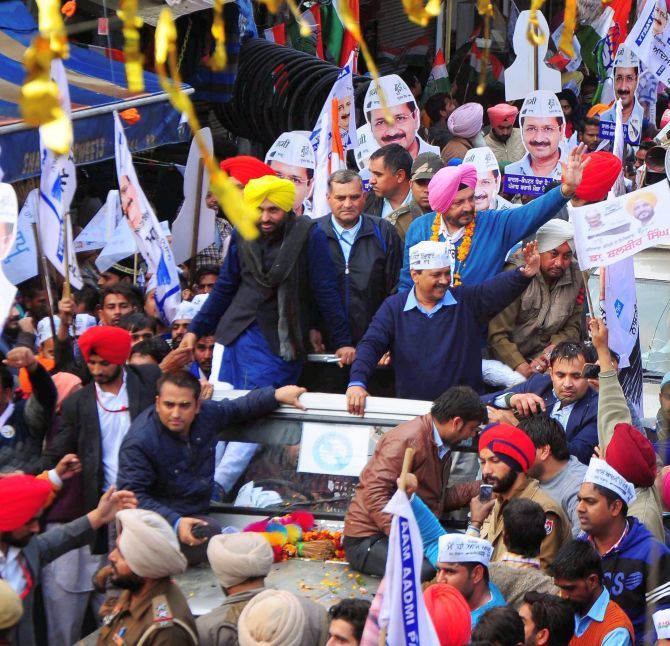 The Aam Aadmi Party on Friday released a populist manifesto for Punjab, promising laptop for all government school students, waiver on residential property tax, setting up of an NRI board, 33 per cent reservation for woman in government jobs and giving the state a Dalit deputy chief minister if it comes to power.

The manifesto, on the lines of the party’s promise in Delhi in 2015, also says the AAP government will set up Aam Aadmi canteens at sub-division and district levels where one time meal will be available for Rs 5, and reduce the power tariff to half for usages up to 400 unit.

A team of AAP leaders led by Punjab in-charge Sanjay Singh released the manifesto in Patiala, which also promises that Amritsar and Anandpur Sahib will be declared as holy cities.

Singh, who is national general secretary of AAP, said all promises made by them in the previous six manifestos released for different categories “are an agreement with the people of Punjab and AAP will fulfil each promise”.

He said welfare of the Dalits, below poverty line families, employees, farmers and women would be top on agenda of the AAP government as he declared the post of deputy chief minister would be given to a Dalit MLA.

It said it has also decided to launch a health insurance scheme under which every resident of state would be eligible for cashless treatment of up to Rs 5 lakhs in private hospitals.

The party also announced that alleged mafia in transport, liquor and sand mining would be demolished and these sectors would be opened for general public.

“The passenger buses would be run by public transport and permits will be given to the unemployed youth. Similarly, the monopoly in liquor and sand mining would be broken and contracts would be given to youth,” AAP said.

The party the measure would help AAP achieve its target of creating 25 lakh new jobs in the state.

AAP alleged the previous government had failed to address the problems NRIs face.

“AAP will set up an NRI board and properties of NRIs grabbed illegally by Shiromani Akali Dal and Congress leaders will be evacuated within 15 days with certain exceptions due to court cases,” it said.

“The DCs and SSPs would be directly responsible in case of any incidents of land grabbing of NRIs,” AAP said.

AAP said Jan Lok Pal and human right commission would be given more teeth to provide corruption-free government and also to uphold the human rights.

The party said investigating all cases of alleged sacrilege and giving “exemplary punishment” to the guilty is another priority of AAP.

Besides, law and order and road safety would be implemented with zero tolerance towards violators.

Education and health would form core areas of development. Every primary school would have minimum five teachers, 29,000 vacancies of teachers would be filled and about 30,000 new posts would be created.

Every village would have a ‘Pind Clinic’ and every urban area would have mohalla clinics on pattern of Delhi, the manifesto says.

Three medical colleges and degree colleges in unrepresented areas would be opened, it says.

AAP leaders said the party has promised with the employees to implement 6th pay commission fully and revive the old pension scheme “which was discontinued by erstwhile Capt Amarinder Singh Government”.

All contractual employees “direct or through outsourcing will be regularised”.

The farmers would be made debt-free by December 2018 and compensation for crop damage would be enhanced to Rs 20,000 per acre besides giving Rs 10,000 to farm labourers in lieu of their salaries if crop fails or damaged.

Sir Chhotu Ram Act of 1934 on farm debts would be implemented and those farmers who had paid interest more than the loan amount would be deemed as having paid.

The ‘Ahrtiyas’ (Commission agents) would not be allowed to charge interest more than bank rates.

On the drugs issue, which has emerged as major issue being raised by the Opposition to target the SAD-BJP government, AAP said Punjab would be “drug-free and smugglers would be in jail within 15 days of forming government”.

Ex-servicemen will get 13 per cent reservation in jobs and gallantry award winners, who are waiting for their award of land or money in lieu of land, would be compensated immediately.

The SC, ST and BC commission would be given full powers to deliver justice to deprived sections.

The AAP, if it forms the government in Punjab, would protect the interests of business class and industry.

The power tariff for industry would be brought under Rs 5 per unit.

All existing schemes like “atta-dal scheme” would continue and eligible persons who were not included would be enrolled for the scheme, it said. The AAP manifesto, which has a catchline- “for a modern, corruption-free and prosperous Punjab”, also talks about taking tough steps to tackle drug menace.

Special law will be enacted to give life imprisonment till death for drug dealers after being found guilty. Assets of all such convicts would be seized and auctioned, the
manifesto says.

All candidates contesting local body and panchayat elections will have to compulsorily sign an affidavit declaring themselves to be “drug free”.

“We (AAP) will also campaign for appropriate changes in the Representation of People’s Act (Central Government legislation) to make it mandatory for the assembly and parliamentary election candidates to also sign similar affidavits.”

Wooing the farmers, the manifesto promises implementation of Swaminathan Commission Report on crop pricing by December 2020.

On the water issue, it says, “Re-registration of Land acquired for the Satluj Yamuna Link Canal by Congress and Shiromani Akali Dal governments earlier, in the name of original owners; Set-Up Water Regulatory Authority to protect and conserve the water of Punjab.”

To end the “VIP culture”, it says no AAP MLA, minister, MP or any other senior leader will use vehicle with hooters and red beacon lights. “VIP culture will be ended by cutting down personal security by 95 per cent”.

AAP also promises one time regularisation of nursing homes on ‘as is where is’ basis by a committee which includes doctors and their associations.

Fees of private medical colleges will be rationalised.

Old age pension for senior citizens will be increased to Rs 2,500 per month, as per the manifesto.

Incubation Centres called Punjab Launch Pads will be set up in 10 major cities of Punjab, the AAP manifesto mentions.

‘Kanshi Ram Youth Skill University’ will be set up in Doaba Region, with two regional campuses in Malwa and Majha regions of the State.

Free WiFi hot-spots will be created in all villages, cities and government colleges.

There will be no application fee for applying to government jobs (currently fees range from Rs 500 to Rs 3000).

Tax regime will be simplified and transparent. VAT and other taxes will be reduced on Delhi pattern. In five years, Punjab will have the lowest tax rate. VAT refund to be
expedited, it says.

Five-year tax holiday will be given for women to encourage women entrepreneurs.