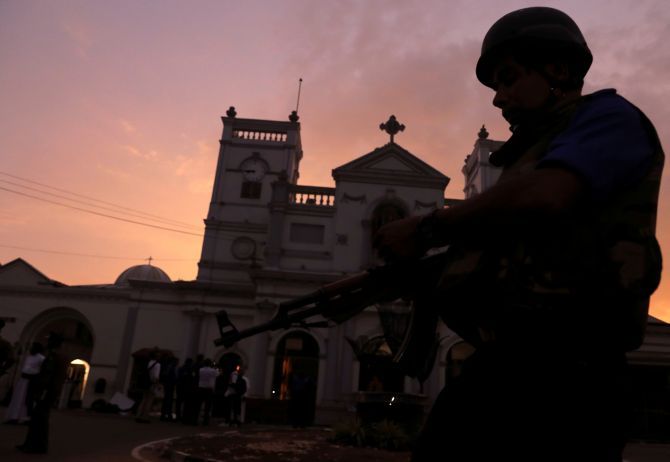 Sri Lanka's former defence secretary Hemasiri Fernando and suspended police chief Pujith Jayasundera were arrested on Tuesday, a day after the attorney general instructed the authorities to charge them for their failure to prevent the Easter terror attacks that claimed 258 lives.

Jayasundera and Fernando were suspended by President Maithripala Sirisena for their alleged inaction on the intelligence shared by India, which warned of an impending attack by Islamic terrorists, and thereby, failing to prevent the serial blasts on April 21.

Jayasundara was arrested at the Police Hospital by the CID, the Colombo Gazette reported.

He was issued notice on Tuesday to appear before the CID to record a statement over the Easter Sunday attacks.

However, he fell ill and was admitted to the Police Hospital.

The CID officers visited the hospital and questioned him and later arrested him, the paper said.

In a letter to acting police chief Chandana Wickremaratne, Attorney General Dappula de Livera on Monday said the duo should be tried for 'grave crimes against humanity' for their failure to prevent the Easter Sunday bombings.

De Livera also slammed Wickremeratne for not taking any action against the two as directed earlier on June 27. Wickremaratne's inaction was of a serious nature, he said.

Sirisena had appointed a three-member panel to probe the negligence by the top officials despite the availability of intelligence inputs on the impending attacks.

Both Jayasundera and Fernando have testified before an ongoing parliamentary probe panel on the attacks.

Both of them claimed that there was discounting of the seriousness of the threat at the very highest level. Sirisena is the minister-in-charge of defence.

Sirisena has slammed the parliamentary probe as one to pin blame on him and accused Prime Minister Ranil Wickremesinghe of being the mover behind the panel.

The opposition blames the government's inability to prevent the suicide bombings due to the ongoing power struggle between Sirisena and Wickremesinghe. PTI ZH