Source: PTI
February 02, 2010 18:51 IST
Lieutenant General Avadesh Prakash, the former military secretary against whom court martial proceedings have been initiated by the Army in the Sukna land scam, has been attached to the Western Command and asked to stay in Delhi till further orders.

"Lieutenant General Prakash has been attached to the Western Command and asked to stay put in Delhi till further orders for summary of evidence is issued," a senior Army officer said on Tuesday.

Army's Delhi area comes under the administrative control of the Chandimandir-based Western Command headquarters. The orders for summary of evidence against Lieutenant General Prakash will come soon, when he will be again attached to one of the Army's command headquarters, for the court martial proceedings to begin.

Prakash was ordered to face disciplinary action leading to a court martial by Army chief General Deepak Kapoor just two days ahead of his retirement on January 31. He is the senior most lieutenant general to face such an action.

Antony's 'advice' had come a week after he had asked the Army chief why disciplinary action was being initiated against Prakash whereas another officer, Lieutenant General P K Rath, found culpable by a court of inquiry for a similar offence in the land scam, was being court-martialed.

Apart from Prakash and Rath, the court of inquiry had also indicted Lieutenant General Ramesh Halgali and Major General P C Sen, who were posted in Sukhna when a No Objection Certificate was issued to Siliguri-based private realtor, Dalip Aggarwal, for purchasing a 71-acre land adjacent to the military station, on the pretext of starting an educational institution.

The realtor's claim to open an affiliate of the Ajmer-based Mayo College at the said piece of land was later found to be false. The Army has already initiated administrative action against Lieutenant General Halgali and Major General Sen in the case. 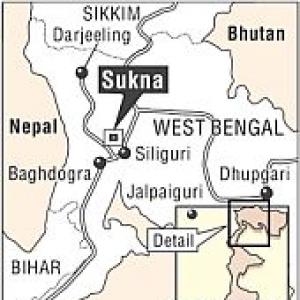 Will not tolerate corruption in the Army: Antony