Rashtriya Janata Party president Lalu Prasad on Tuesday favoured a tie-up between Lok Janshakti Party leader Chirag Paswan and his party, and backed the young leader to emerge victorious in his factional fight with his uncle Pashupati Kumar Paras. 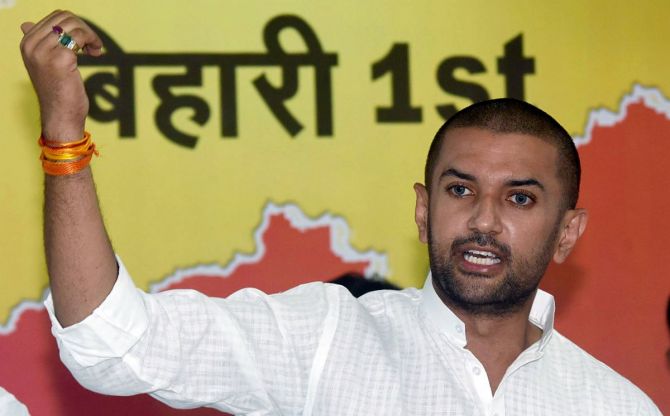 After meeting Sharad Yadav, who is recuperating from a long spell of illness, he said Paswan has emerged as a leader despite the feud in the party and that people have rallied around him.

Paras had led a group of five Lok Janshakti Party MPs against his nephew, who is the only MP left in his faction, and has joined the Modi government as a Cabinet minister.

Paswan, who is spearheading 'Ashirwad Yatra' in Bihar to rally support for his cause, expressed gratitude to the former state chief minister for the support but refrained from making any political comment.

"Lalu ji had madhur sambandh (cordial relations) with my father and political mentor Ram Vilas Paswan. I thank him for lending credence to my leadership. But, my current priority is the ongoing state-wide Ashirwad Yatra", he told reporters.

He, however, ducked queries about Prasad's suggestion that he should team up with his son Tejashwi Yadav who has emerged as the RJD's spearhead in absence of his father, who was released from jail sometime back and has been battling health issues.

After meeting Yadav, the RJD leader told reporters that the absence of socialists leaders like Sharad Yadav, Mulayam Singh Yadav and himself had resulted in neglect of people-related issues in Parliament.

Chirag Paswan has been cornered within his own party following the rebellion staged by his uncle Pashupati Kumar Paras, cousin Prince Raj and other LJP MPs.

The rebellious faction, which has been recognized by the Lok Sabha Speaker though the move has been challenged by Chirag, has squarely blamed the son of its late founding president for the party cutting a sorry figure in the assembly elections last year.

Chirag had pulled out of the NDA ahead of the polls, claiming that the people of Bihar were fed up with Nitish Kumar and yearning for a change in leadership.

He had, however, paradoxically claimed to be loyal to the BJP and Prime Minister Narendra Modi, their backing to Kumar for another term in office notwithstanding.

The saffron party, however, owing to the indispensability of Kumar in Bihar, seems to have distanced itself from the belligerent, hot-blooded leader.

Chirag has been suspecting the JD-U's hand in the split suffered by his party.

On Monday, he alleged that Nitish Kumar's recent posturing on issues like Pegasus, population bill and caste census and the claim of some JD-U leaders that the Bihar chief minister was "PM material" pointed towards a plan to "snatch" the top post from Narendra Modi.