A frail-looking Rashtriya Janata Dal supremo Lalu Prasad on Monday addressed his first political meeting in a long time, castigating the Narendra Modi government at the Centre and Nitish Kumar administration in Bihar for their "many failures" and predicting a bright future for the regional party under his son Tejashwi Yadav. Appearing on national television to mark the silver jubilee of the party he founded in 1997 after breaking away from the Janata Dal, Prasad, who is suffering from many ailments and convalescing at his MP daughter Misa Bharti's residence in New Delhi, recalled his struggles for OBC quota and the fight for the rights of the weaker sections.

Snappy wisecracks were missing from the speech he delivered virtually for scores of RJD workers and leaders at the party's state headquarters in Patna who were waiting for a glimpse of their leader for a long time since his incarceration after conviction in the fodder scam.

"GST and demonetisation as also corona have created an economic crisis. Now, there is the threat of destroying the social fabric. After Ayodhya, some people are talking about Mathura," Prasad, a strident critic of the Bharatiya Janata Party, said without naming the BJP or Prime Minister Narendra Modi.

Rubbishing the "jungle raj" accusation levelled by his rivals against the governments presided over by him and his wife Rabri Devi, the RJD leader claimed it stemmed from the anger of his opponents as the poor and weaker sections got their due.

"We ensured that the poor and the weaker sections reached polling booths. They got angry as the poor got their due," he asserted.

He criticised the Centre over privatisation of PSUs.

"Even Railways is gradually being privatised. This will result in severe unemployment and economic crisis," he said.

Rising fuel prices and inflation have already broken the backbone of the common man, said the RJD supremo.

He attacked the Nitish Kumar government over "rampant corruption", alleged mismanagement of the COVID-19 crisis and "four murders" taking place in the state every day.

"Lakhs and lakhs of people are being reduced to migrant labourers because of lack of employment," he said. 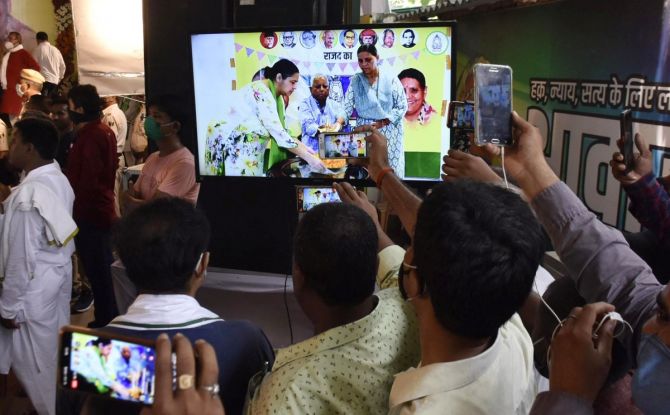 He lavished praise on his younger son Tejashwi Yadav, who is the leader of the opposition, for astutely helming the party during the assembly elections in 2020.

"Frankly, I had never expected this from him. He safely anchored the RJD's boat (naiya paar lagayi). RJD has a bright future," Prasad said.

RJD is the single largest party in the 243-member Bihar assembly though the Janata Dal-United-BJP alliance governs the state.

Prasad also had a word of praise for his elder son Tej Pratap who, he said, made a "forceful speech" at the event.

The RJD president said he was instrumental in making five prime ministers and his party was still strong with its members also in the Lok Sabha and Rajya Sabha.

The RJD boss, known for breathing fire and brimstone while making political speeches, in his restrained addressess, credited his wife Rabri Devi, a former chief minister, and Tejashwi for his being alive.

"But for them, I would have perished in Ranchi (where he was incarcerated in the fodder scam cases). Doctors at AIIMS here also took great care of me," Prasad, who slurred at times, said.

He promised RJD workers and leaders that he will overcome whatever remained of the illness and visit Bihar soon.

"I will come to Patna soon... not only Patna, I will mark my attendance in all districts of Bihar soon. Please don't lose patience," he told them.