DRDO is offering a 30-35-tonne light tank that it says will be a match for what the army faces -- China's new Type-15 light tank.
Ajai Shukla reports. 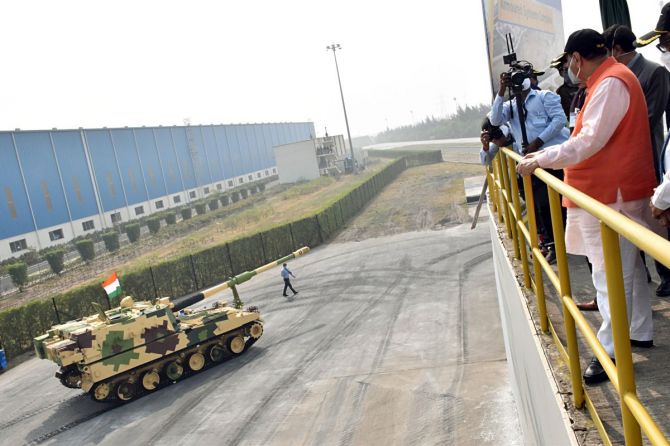 L&T is looking to complete delivery of its contract for 100 K-9 Vajra tracked guns by February, well ahead of schedule.

After February, however, once the Indian Army has been handed over the last of these 155 mm, 52-calibre howitzers -- essentially artillery guns mounted on a tank chassis for mobility -- the ASC Hazira production line will fall silent.

Then the expertise accumulated by L&T while building 100 K-9 Vajra guns will start dissipating.

This is because the army is soft-pedalling the Defence Research and Development Organisation proposal to manufacture at L&T's facilities a line of at least 500 light tanks, which will be powered by the same 28-tonne chassis, hull and engine that powers the K-9 Vajra.

Instead of the K-9 Vajra artillery turret that mounts a heavy, 155 mm gun that shoots over the horizon, the light tank will have a smaller turret with a direct firing, high-pressure 105 mm gun, ready-built by Belgian firm John Cockerill.

DRDO is offering the light tank for the army to use in high-altitude areas such as Ladakh, where the Chinese ingress last May has already forced the deployment of two additional divisions (36,000 troops) and the impending move of another two divisions that are being diverted from a mechanised strike corps.

To supplement the two armoured regiments (each with 45 tanks) that already defended the China border, the army has additionally raised two independent armoured brigades over the preceding decade -- one for operations in Ladakh and the other for Sikkim and Arunachal Pradesh. Each of these brigades fields 175-200 tanks.

All these 500-odd tanks are currently 42-tonne T-72M1s, which are too large and heavy to move and operate in the narrow, twisty roads and low-weight-bearing bridges that are found in the Himalayas.

Nor are the T-72 tank engines customised to operating in the oxygen-depleted atmosphere at those altitudes.

But the army has still not backed DRDO's efforts to replace the T-72s with a light tank that is custom-built for India's rugged borders.

DRDO is offering a 30-35-tonne light tank that it says will be a match for what the army faces -- China's new Type-15 light tank, also referred to as the ZTQ-15.

Built by thwe Chinese public sector firm Norinco, the Type-15 has been deployed over the past year on the Tibetan plateau opposite Eastern Ladakh.

DRDO sources say the indigenous light tank will be at least a match for the Type-15.

Engineers of the Central Vehicle R&D Establishment, the Chennai-based DRDO laboratory that designs and develops armoured vehicles, say they are working with L&T to reduce the weight of the 28-tonne Vajra chassis by 3-4 tonnes, which will bring the overall weight of the light tank to about 30 tonnes.

That will allow the Vajra's 1,000-horsepower German MTU engine and Allison transmission to create sufficient mobility for the light tank, even at high altitudes where engines deliver less than 80 per cent of the power they would at sea level.

Each light tank will have a fully-stabilised 12.7-mm heavy machine gun and a co-axial 7.62-mm medium machine gun.

In addition, the turret will have a retractable missile launcher that can fire anti-tank guided missiles to destroy targets out to 2.5 km.

A major hurdle to the tank's design is that the army has not yet shared with DRDO its notion of what design features and performance it would like.

This is usually shared in a document called the 'preliminary staff qualitative requirements'. Without this, DRDO's designers are groping in the dark.