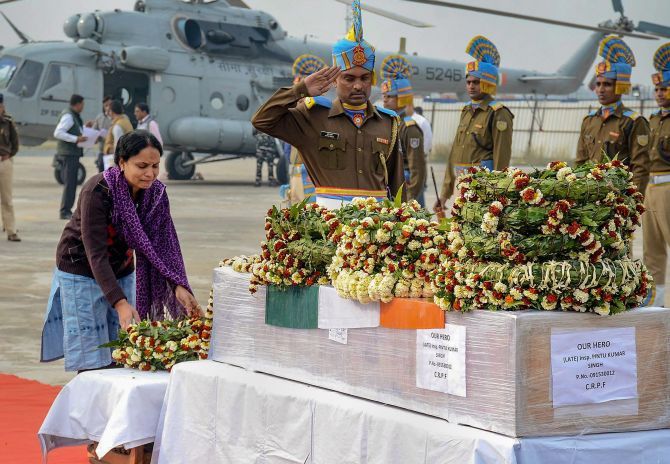 IMAGE: A family member pays tribute to CRPF inspector Pintu Kumar Singh, who was killed in an encounter with terrorists at north Kashmirs frontier Kupwara district, at a ceremony in Patna on Sunday. Photograph: PTI Photo

Two terrorists, five security forces' personnel, including a Central Reserve Police Force officer, and a civilian were killed in a 56-hour encounter in Kupwara district of Jammu and Kashmir, police said on Sunday.

A police spokesman said the operation at Babagund area of Kupwara took time as it posed considerable difficulties to the security forces due to the topography of the area.

Two terrorists were killed by security forces in the encounter which began on Friday morning, the police spokesman said in Srinagar.

He said bodies of both the terrorists were recovered from the site of the encounter and their identities and affiliations are being ascertained.

The spokesman said a CRPF jawan -- identified as Sham Narayan Singh Yadav -- who was injured in the exchange of fire on Friday, succumbed to injuries on Sunday -- taking the number of security forces' fatalities to five.

He said one civilian, Waseem Ahmad Mir, also sustained bullet injury 'in the nearby area' and later succumbed at a hospital on Friday.

The encounter had begun when security forces launched a search operation in Babagund area in north Kashmir, following information about presence of terrorists there.

"Area where the terrorists were hiding was very congested and civilians in the adjoining houses had to be evacuated to the safer places away from the site of encounter," he said.

Police have registered a case in this matter and the incriminating materials have been taken in case records for further investigation, the spokesman added.

He urged people to not go near the encounter zone as there could be stray explosives.

"People are requested to cooperate with police till the area is completely sanitized and cleared of all the explosives materials if any," the spokesman said.

Meanwhile, Uttar Pradesh Chief Minister Yogi Adityanath has announced Rs 25 lakh ex gratia to the next kin of each of the two CRPF personnel who lost their lives in the encounter.

Expressing profound grief at the death of Vinod Kumar of Ghaziabad and Shyam Narain Yadav of Ghazipur, the chief minister has announced an ex gratia of Rs 25 lakh each for their families, an official spokesperson said.

Adityanath also said that one kin of each of the slain CRPF personnel will be given a government job and one road in their native districts will be named after them, he said.

Bodies of two people, including a constable of Sashastra Seema Bal, were recovered on Sunday in Ramban district of Jammu and Kashmir, police said.

According to preliminary investigation, the jawan had left Srinagar for his home on February 25.

Police have registered a case and further investigation is on to ascertain the cause of his death, the SHO said.

Another deceased was identified as Surinder Paul, an employee of the General Reserve Engineer Force (GREF).

His body was recovered from a stream in nearby Digdole area.

Paul, a resident of Pathankot in Punjab, was posted in Ramban, police said, adding that inquest proceedings have been started.