The tottering Congress-Janata Dal-Secular government in Karnataka led by H D Kumaraswamy will face the floor test in the assembly on July 18, that would end suspense over the numbers game triggered by a raft of resignations by the ruling coalition lawmakers. 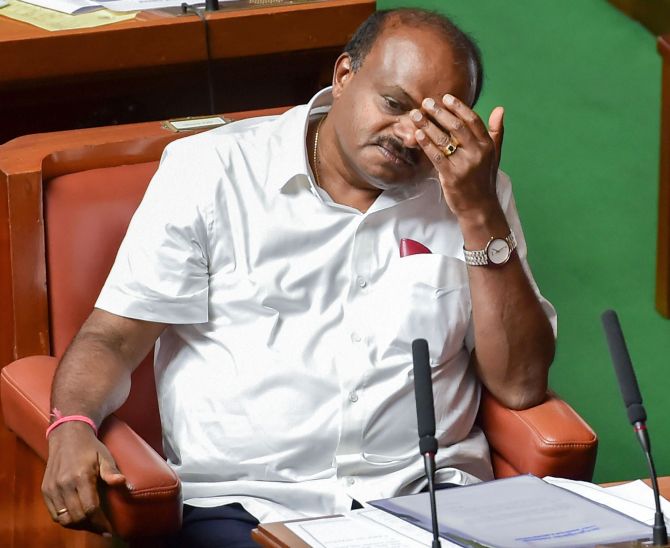 As the political turmoil lingered on with the ruling coalition making frenetic efforts to win back rebels who have pushed it to the brink of collapse, assembly Speaker K R Ramesh Kumar on Monday announced the confidence motion sought to be moved by Kumaraswamy would be taken up at 11 am on July 18.

The date has been fixed after consulting both the opposition and ruling coalition leaders at the Business Advisory Commitee meeting, Kumar said in the assembly and adjourned it till Thursday as demanded by the Bharatiya Janata Party.

BJP maintained the government had been reduced to "a minority" with the 16 coalition MLAs resigning their assembly membership and hence opposed conduct of House business till the trust vote.

Kumaraswamy continued to remain confident his government would get over the crisis.

"I have full confidence... why do you worry," he told reporters in response to a question as the coalition struggled to shore up its numbers brought down by the MLAs' resignations. 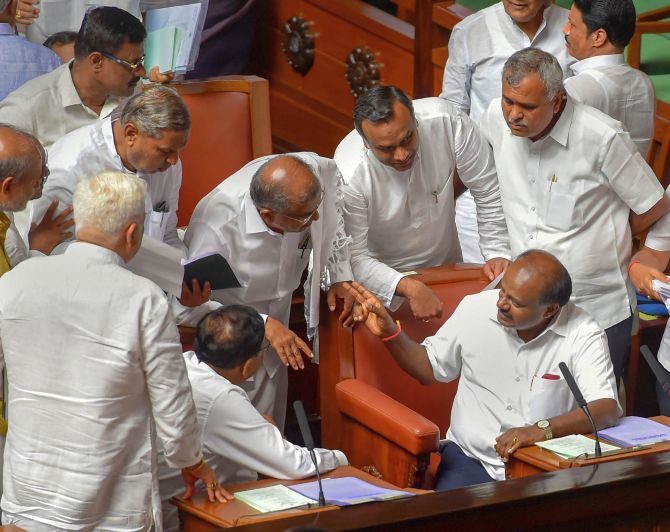 Senior Congress legislators said they have got more time to continue their efforts to mollify the rebel MLAs.

Keeping up pressure on the Speaker and government, BJP also sought to move a no-confidence motion against the over 13-month old Kumaraswamy ministry with its members J C Madhu Swamy, K G Bopaiah and C M Udasi submitting a notice, but later agreed to the trust vote schedule.

"As already he (CM) has submitted the motion and has expressed the intention (to seek trust vote), so we will take it up first. Opposition leaders said they have no objection and things can go as suggested, Speaker Kumar said.

The Speaker's announcement after the assembly's Business Advisory Committee meeting came even as the Supreme Court on Monday agreed to hear a plea of five more rebel Congress MLAs along with the pending petition of 10 legislators seeking a direction to him to accept their resignations.

A bench headed by Chief Justice Ranjan Gogoi took note of the submission of senior advocate Mukul Rohtagi, appearing for the five rebel MLAs that they also be made parties to the pending petition, which is to be heard on Tuesday.

Passing interim orders on petitions by the 10 rebel MLAs, the apex court had on July 12 restrained the Speaker from taking any decision till Tuesday on their resignation and disqualification. 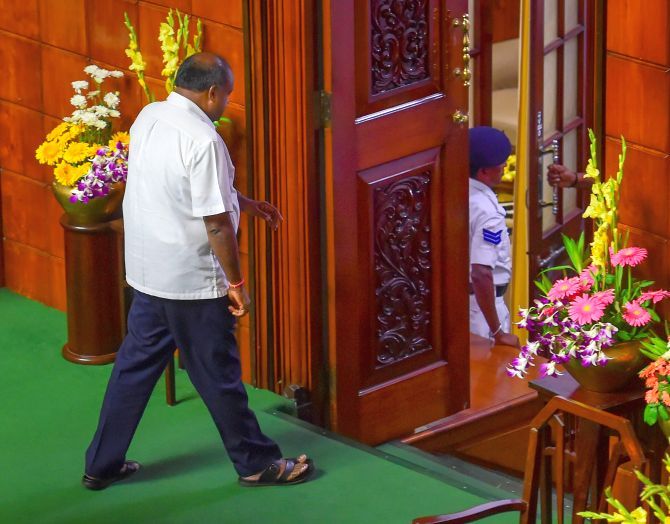 As many as 16 MLAs -- 13 from the Congress and three from JD-S -- have resigned on July 6 while two independent MLAs S Shankar and H Nagesh later withdrew their support to the coalition government, keeping it on the edge.

The disgruntled MLAs are hunkered down in Mumbai and have not turned up for the assembly proceedings, which began last Friday.

Apparently in no mood to yield, the rebel MLAs have written to the Mumbai police chief, saying they don't want to meet senior Congress leader Mallikarjun Kharge or any other Congress leader.

Their move came amid speculations that Kharge, some other senior Congress leaders and Kumaraswamy may visit Hotel Renaissance in Powai where the rebel MLAs are sequestered, to win them back to the coalition fold.

The MLAs said they feel threatened, and requested the police to stop any Congress leader from meeting them.

Meanwhile, reacting to the developments, Yeddyurappa said, the BAC meeting went on in a cordial atmosphere. 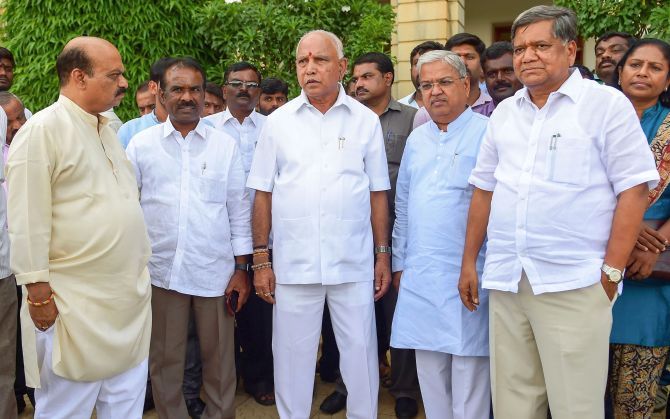 IMAGE: BJP state president B S Yeddyurappa with party leaders after speaker announced that the vote of confidence will happen on Thursday. Photograph: Shailendra Bhojak/PTI Photo

He said that after the BJP sought to move a no confidence motion, government decided fix a date for the trust vote.

"We had requested that no business should be transacted until the trust vote is sought, and as per our request the house has been adjourned till the Thursday to meet for trust vote. We welcome it," he said.

Congress Legislature Party leader and coordination committee chief Siddarmaiah said that after discussion with both sides, the Speaker has fixed on Thursday as the date for trust vote, and "we have agreed to move vote of confidence."

Battling for surival, Kumaraswamy had made a surprise announcement on Friday that he would seek a trust vote to end the 'confusion' caused by resignations of rebel MLAs while asserting he was "ready for everything".