In what is suspected to be the handiwork of anti-nuclear activists, a car of a contractor working at the Kudankulam Nuclear Power Project site was found gutted on Wednesday, as protesters met to draw up a strategy to oppose loading of fuel in the reactor.

The car of civil engineering contractor, Subramanian, who was undertaking work at the KNPP complex, was found destroyed in a fire in front of his house early this morning with police suspecting the hand of anti-nuclear activists in it.

Police said the incident is being probed.

Meanwhile, fishermen from coastal villages of Rameswaram, Kanyakumari and Tuticorin met members of Peoples Movement Against Nuclear Energy, spearheading the stir against the KNPP, at Tuticorin to discuss the second phase of the stir.

After the meeting, fishermen representatives said a decision on when they would lay siege to the plant would be taken by Thursday.

Top office bearers of PMANE, including its convener S P Udhayakumar and Pushaparayan, who were at Koothakuzhi, could not attend the meeting. But another member Arimavalavan participated.

On September 10, anti-nuclear activists tried to lay siege to the plant but were thwarted by police, prompting police to lob teargas shells and use canes to quell them.

It has already been decided to picket the Tuticorin Port with mechanised fishing boats on a date to be announced as part of the second phase of agitation. But a decision about picketing the plant and the mode of agitation would be taken by Thursday, sources said.

Fishermen representatives said some resolutions were passed at Wednesday's meeting. These included demand for lifting of prohibitory orders around seven km radius of KNPP at Idinthakarai, talks with the Chief Minister and a probe into the September 10 incidents.

Udayakumar, who is evading arrest since the September 10 incidents, had said on Tuesday that PMANE's strategy committee would soon take a decision. 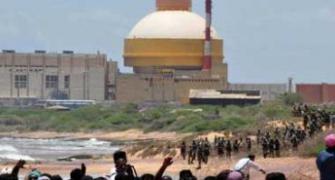