The Karnataka government has withdrawn its request to the railways to run special trains to ferry migrant labourers to their home states, hours after builders met chief minister B S Yediyurappa to apprise him of the problems to the construction sector in case they left. 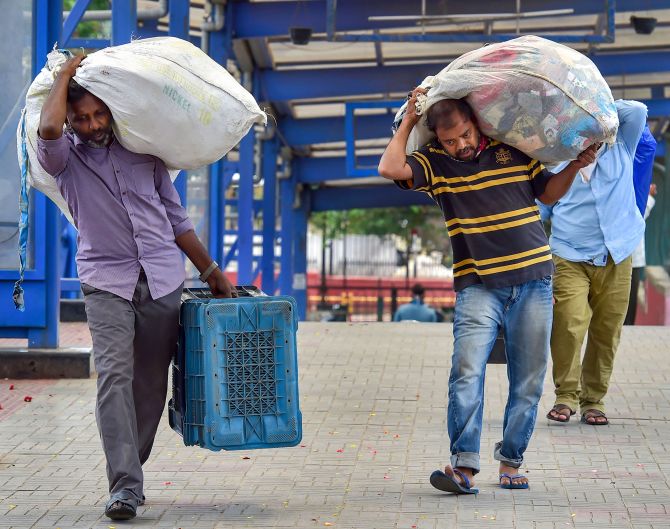 IMAGE: Migrants with their belongings arrive at Majestic bus stand to board a bus to reach their native places in Bengaluru. Photograph: Shailendra Bhojak/PTI Photo

The principal secretary in the revenue department N Manjunatha Prasad, who is the nodal officer for migrants, had requested the South Western Railways on Tuesday to run two train services a day for five days except Wednesday, when the state government wanted services thrice a day to Danapur in Bihar.

However, later, Prasad wrote another letter within a few hours that the special trains were not required.

Several migrants in Bengaluru were desperate to return home as they were out of job and money.

"Since the train services are not required from tomorrow, the letter cited under reference above is withdrawn," Prasad wrote to the SW Railway General Manager on Tuesday.

The railway officials said they have received the letter seeking withdrawal of the previous one for running special trains.

However, Prasad was not available for comments.

The builders had apprised the CM about the shortage of labourers if they were allowed to go back home, said a source privy to the issue.

While the supply of construction material was not a major issue with the relaxation in lockdown norms, Bengaluru would witness labour problem if the migrant workers were allowed to go back to their home states, the builders said.

After the meeting, the chief minister urged the labourers to stay back and assured them of every assistance.

The migrant labourers from Uttar Pradesh, Bihar, Odisha and West Bengal had created a ruckus in Bengaluru on Monday demanding that they be sent home.

They went on rampage and attacked police personnel too.

After much efforts, the situation was brought under control.

On Tuesday, Karnataka revenue minister R Ashoka met the migrant labourers at the Bangalore International Exhibition Centre, where they have been accommodated.

Most of the migrant labourers were afraid of staying in Bengaluru for the fear of getting COVID-19.

heir another apprehension was that if any untoward happens to them or their family members they won't be able to go back to their home town.

Shailesh, a painter from Gorakhpur in Uttar Pradesh said that all the money he had is exhausted now.

"My elder brother is stuck in Hyderabad whereas I am held up in Bengaluru. Both of us are now jobless for the past one-and-half months," Shailesh said.

He also said the money lender who had lent Rs 40,000 to his parents, was pestering them for the past one week.

A few migrant labourers stuck in the slums near Subramanyapura in the state capital said they are out of cash to purchase grocery items.

"We are getting khichdi, but how long can one eat this alone," they said.