The rebel Karnataka MLAs staying at a Mumbai hotel have written to the city police chief, saying they don't want to meet Mallikarjun Kharge or any other Congress leader. 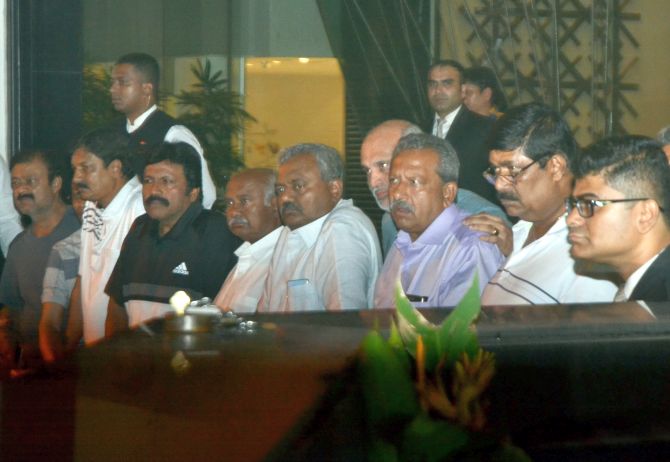 There have been speculations that Kharge, some other senior Congress leaders and Karnataka chief minister H D Kumaraswamy may visit Hotel Renaissance in Powai where the rebel legislators are put up.

The MLAs in the letter said they feel threatened, and requested the police to stop any Congress leader from meeting them.

Fifteen rebel MLAs from Karnataka, including those of the Congress, Janata Dal-Secular and Independents, are staying at the hotel in Mumbai.

Leaders of the crisis-hit ruling Congress-JD-S coalition in Karnataka on Sunday held hectic parleys to discuss the future course of action to save the government.

The embattled leaders continued with efforts to woo back some legislators who have resigned, ahead of Kumaraswamy's trust vote expected this week.

However, the rebel legislators, who are camping in Mumbai, made it clear that they were united and "firm" on their resignations.

The Kumaraswamy-led government in Karnataka is on the brink of collapse with 16 MLAs -- 13 of the Congress and three of the JD-S, resigning from their assembly memberships.

Two Independent MLAs have also withdrawn support to the state government and are supporting the opposition BJP.

With the support of two Independents, the opposition BJP has 107 MLAs in the 224-member House.

If the resignations of the 16 MLAs are accepted, the ruling coalition's tally will be reduced to 100. The Speaker has a vote too.