The contentious "anti-conversion bill" was passed by the Karnataka Legislative Assembly on Thursday, amid din, with Chief Minister Basavaraj Bommai terming it as both constitutional and legal, and aimed at getting rid of the menace of religious conversion. 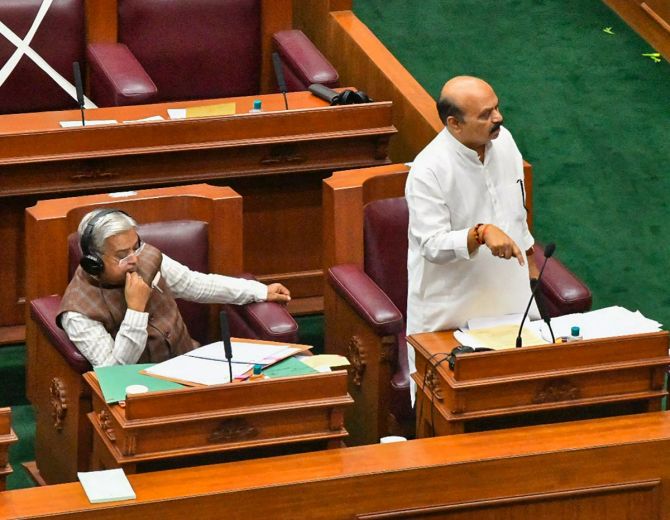 Opposing the "Karnataka Protection of Right to Freedom of Religion Bill, 2021", tooth and nail, the Congress dubbed it "anti-people", "inhuman", "anti-constitutional", "anti-poor" and "draconian", and urged it should not be passed for any reason and that it be withdrawn by the government.

JD(S) too expressed its opposition to the bill, which was introduced in the Assembly on Tuesday.

The bill provides for protection of right to freedom of religion and prohibition of unlawful conversion from one religion to another by misrepresentation, force, undue influence, coercion, allurement or by any fraudulent means.

The bill also makes provisions for the accused to pay up to Rs five lakh as compensation to those who were made to convert, and with regards to cases of mass conversion there shall be a 3-10 year jail term and a fine of up to Rs one lakh.

It also states that any marriage which has happened for the sole purpose of unlawful conversion or vice-versa by the man of one religion with the woman of another, either by converting himself before or after marriage or by converting the woman before or after marriage, shall be declared as null and void by the family court. Wherever the family court is not established, the court having jurisdiction to try such case, on a petition presented by either party thereto against the other party of the marriage.

The offense under this bill is non-bailable and cognizable.

The bill was passed by a voice vote on Thursday, even as Congress members were protesting from the well of the House, demanding continuation of the debate on it, that began earlier in the day.

They were also expressing their anguish against some remarks made by Minister K S Eshwarappa, during his intervention in the debate.

However, Congress seemed to be on the back foot with the ruling BJP alleging the bill was actually "initiated" by the former Chief Minister Siddaramaiah led administration, and placed documents to support its claim before the House.

Though Siddaramaiah, now the Leader of Opposition, denied it, later on went through the records in the Speaker's office and accepted that as the CM he had then only asked the draft bill to be placed before the cabinet and no decision was taken in this regard. Hence it cannot be seen or projected as the intention of his government.

With Siddaramaiah alleging RSS' hand behind the bill, Chief Minister Bommai said, "RSS is committed to anti conversion, it is not a hidden secret, it is an open secret. Why did the Congress government in 2016 initiate the bill during its tenure following the RSS' policy? It is because Congress CM in Himachal Pradesh Virbhadra Singh had brought a similar law. You are a party to this bill."

Bommai said the bill is both constitutional and legal, and aimed at getting rid of the menace of religious conversion.

"It is for a healthy society.... Congress was indulging in vote bank politics by opposing it now, their double standard is clear today."

Further, the person who wishes to convert will lose the religion of his or her origin and facilities or benefits attached with it, including reservations; however, one is likely to receive the benefits entitled to, in the religion he or she converts to, Home Minister Araga Jnanendra, who piloted the bill, said.

According to Jnanendra, eight states have passed or were implementing such a law, and Karnataka would become the ninth one.