Karnataka Congress president DK Shivakuamr on Sunday rejected reports about differences between him and Congress legislature party leader Siddaramaiah regarding the recommendations made by the state unit on candidates to the party high command for the upcoming MLC polls. 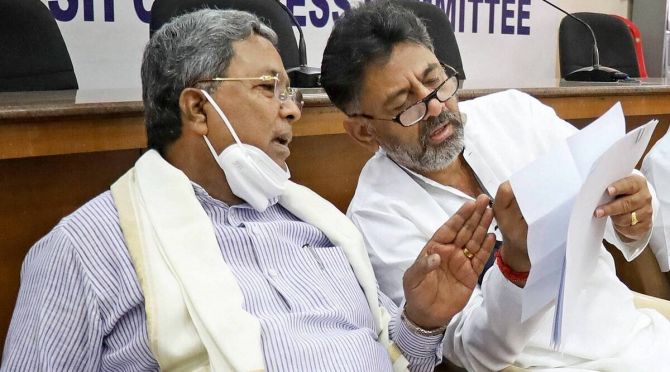 With May 24 being the last date to file nominations for the polls to seven seats of the Karnataka legislative council to be elected by MLAs, he said the state unit has sent its recommendations on candidates to the party high command and the decision will be out soon.

"The tradition in the Congress party is, we share our opinion (with the high command). Over 100 aspirants had applied or desired, few others did not apply but have the required qualification. We have sent in our recommendation considering all those, and the high command will take the final decision," Shivakumar said.

Speaking to reporters in Bengaluru, he said the state unit only sends the recommendation but does not take sides as to who should be given the ticket.

To a question on reports about him and Siddaramaiah not being on the same page regarding the recommendations, the Karnataka Pradesh Congress Committee chief said both of them have discussed and unanimously sent in the proposals.

"There are only two seats, how many names can we give? So considering all aspects, we have sent in names. The high command will decide," he added.

The election which will be held on June 3, is necessitated as the term of office of seven members is going to expire on June 14.

The seats will be falling vacant, due to the retirement of MLCs -- Laxman Sangappa Savadi and Lahar Singh Siroya of BJP; Ramappa Timmapur, Allum Veerabhadrappa, Veena Achaiah S of Congress; and H M Ramesha Gowda and Narayana Swamy KV of the Janata Dal-Secular.

According to official sources, in this election, each MLC candidate will require a minimum of 29 votes to win, and on the basis of minimum votes required and tallying it with the strength of each party in the legislative assembly, the Bharatiya Janata Party will be able win four seats, Congress two and JD-S one.

The ruling BJP and JD-S too have not announced their candidates yet.

Stating that there is pressure with regards to tickets for the June 10 Rajya Sabha polls, Shivakumar said, "We have brought to the notice of the high command as to how many seats the BJP and the JD-S can win."

"...we will see, all options are still open. We will decide based on the directions of the high command. Whether to field candidate for (an extra seat) or to remain quiet or to support others," he said, adding that the party is also keeping a watch on actions of the BJP and JD-S.

To a question about several state leaders including him having an opinion that someone from Karnataka should get Rajya Sabha ticket keeping the 2023 assembly polls in mind, he said, with regards to Rajya Sabha, decisions are always made by the high command in the interest of the party.

The election to four Rajya Sabha seats is necessitated as the term of office of members -- Nirmala Sitharaman (Union finance minister) and KC Ramamurthy of BJP, and Jairam Ramesh and late Oscar Fernandes of Congress -- is due to expire on June 30. The last date of filing nominations is May 31.

A candidate needs 45 votes to win in this RS election, and based on the current party position in the Legislative Assembly, the BJP can win two and Congress one, official sources said, adding that the JD(S) can win one provided it gets the support of either one of the parties.

According to sources, while, Congress may once again field Jairam Ramesh from the state, the ruling BJP is said to have recommended ticket for Nirmala Sitharaman to get re-elected, while the names of outgoing Rajya Sabha member KC Ramamurthy, outgoing MLC Lehar Singh Siroya, Nirmal Kumar Surana and entrepreneur Prakash Shetty are doing the rounds for the second seat. 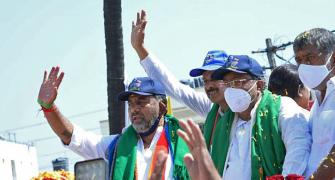 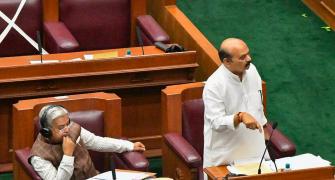 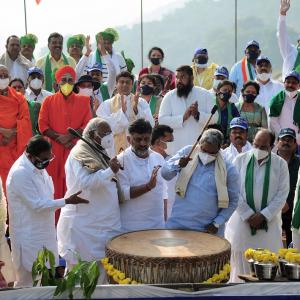 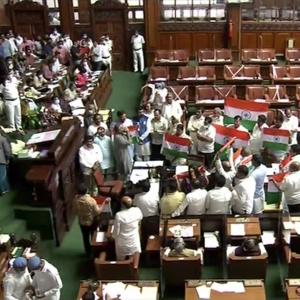