The ruling Bharatiya Janata Party and Congress continue to spar over speculations regarding Chief Minister Basavaraj Bommai's replacement ahead of the 2023 assembly polls in Karnataka, as several ministers and leaders of the saffron party on Wednesday rejected any change in leadership, and challenged the opposition party to name its CM candidate. 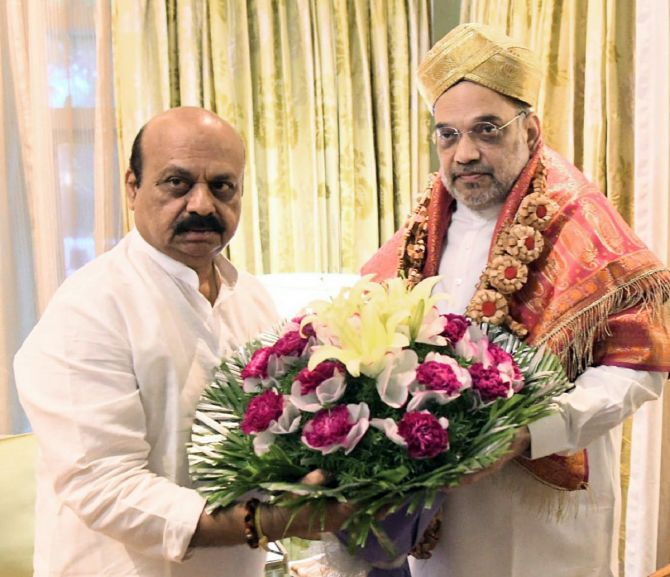 With the Congress on Wednesday choosing to continue to fuel rumours about a change in CM, calling Bommai a "puppet CM" for the second consecutive day, the BJP hit out at the party for unnecessarily raking up the issue to cover up the rift and factionalism within.

There are reports that Bommai, who is currently under home isolation after testing positive for Covid-19, expressed his displeasure about such "unnecessary speculation" regarding his continuity in the post, and similar sentiments are said to have been expressed by the party's central leadership to some state leaders.

With speculation persisting, none less than state BJP strongman Yediyurappa on Wednesday said Bommai will complete the term and no such discussions about a change has taken place in the party or between him and Union Home Minister Amit Shah when they met last week.

The former chief minister also said the party leadership will decide on the next state BJP president, once the incumbent Nalin Kumar Kateel's term is over, and that he and other state leaders will tour Karnataka together with an aim to come back to power in the 2023 assembly polls.

Kateel too rejected talks about changing the CM by stating that Bommai would complete his tenure.

Accusing the Congress of unnecessarily raking up the issue of CM replacement to cover up the rift within, senior BJP leader and Revenue Minister R Ashoka challenged the opposition party to name its CM candidate for the 2023 assembly polls.

He said the BJP's top leadership, including Prime Minister Narendra Modi and Union minister Shah, have already said that the election will be under Bommai's leadership and the party will abide by it.

State Ministers ST Somashekar, Byrathi Basavaraj, Sunil Kumar, Araga Jnanendra, Sommana, and BJP national general secretary CT Ravi were among those who hit out at Congress, questioning its morality to comment on the BJP's leadership and longevity of the incumbent CM's tenure, as they asked the party to announce their CM candidate first, "if they have guts".

CM Bommai was doing a good job, the BJP leaders said while adding that Congress was worried about its prospects in the future, amid factionalism and infighting, and spreading such false and baseless information.

The Congress said: "For BJP high command Karnataka CMs are like puppet CM...when a leader like BS Yediyurappa was sent home (from CM seat) without any notice, what is Bommai for them?"

The principal opposition party also made a reference to the failures of the Bommai government and allegations of corruption against his government.

"Despite visiting Delhi 12 times in one year, the puppet CM's inability to solve cabinet related issues is the best example for this."

There has been some buzz on and off within the state BJP in recent times, regarding some kind of an overhaul including at the top level, especially after the recent visit of Amit Shah to the state.

Also, former BJP MLA B Suresh Gowda's recent statement indicating some changes that the party high command will take a call on replacing the chief minister and other matters in the interest of the party and to win the elections in future, has added to the speculation.

Responding to a question regarding the source of information about changing the CM, state Congress president D K Shivakumar said BJP leaders themselves are talking about it and his party has only "picked" what they have been saying.

"BJP leaders, former MLAs, former ministers are speaking about replacing the CM. We are only discussing the information given by them, like the media does...each party will have source of information, a former BJP MLA and district president has himself spoken on changes expected," he said.

However, interestingly the Congress legislature party leader and former chief minister Siddaramaiah maintained distance from the tweets posted on the party's official Twitter handle stating that he has no information about plans to replace Bommai.

Bommai, who took over from Yediyurappa as chief minister, completed one year in office on July 28.

The '3 CMs' reference by the Congress, in its tweets, is with regard to the earlier BJP government between 2008 and 2013, which saw three chief ministers -- Yediyurappa, DV Sadananada Gowda and Jagadish Shettar.