It all happened in a flash. Or so it seemed. Just when they thought they had reached home, their plane skidded off the runway at the airport in Kozhikode, breaking into two as it fell into a 35-feet gorge in pelting rain, survivors of the crash said on Saturday. 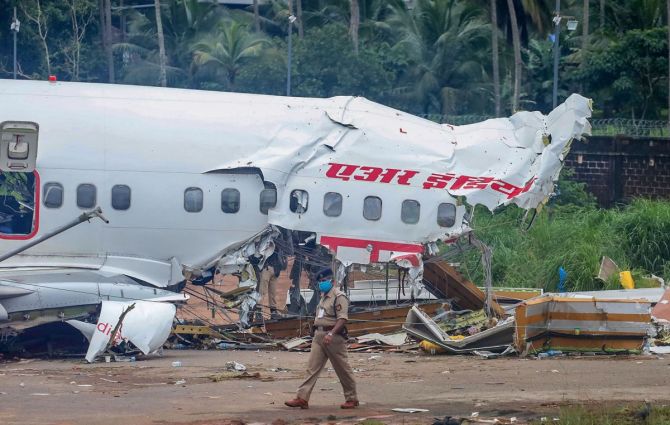 IMAGE: Mangled remains of an Air India Express flight, en route from Dubai, after it skidded off the runway while landing on Friday night, at Karippur in Kozhikode, on Saturday. Photograph: PTI Photo

The 184 passengers on board the Air India Express plane from Dubai that crashed on Friday evening had waited a long time to get tickets on the repatriation flight, part of the Centre's Vande Bharat Mission to bring back Indians stranded abroad in the coronavirus pandemic.

For some, the homecoming never happened. 18 people were killed, including the two pilots.

For others, the screams of their fellow passengers trapped in the twisted metal, the injuries, the close brush with death and the interminable wait to be rescued are part of a nightmare they may take a long time to wake up from.

The four cabin crew were among the 172 people who escaped with injuries. Officials said 149 people were admitted to various hospitals and the condition of 16 is serious.

As they recovered from their injuries, some shaken and traumatised, others still coming to terms with what had happened, there were those who said there was much to be thankful for.

Like Ramshad. He is injured but his wife Sufaira and four-year-old daughter Saidasherin escaped without any serious wounds.

"We did not realise what really happened other than the fact that the flight was shaking," said Ramshad, from Vatakara near Kozhikode, grateful that his family was spared.

Ashraf, who belongs to east Kozhikode, now under treatment at the Medical College Hospital here, said he is yet to recover from the shock.

Recalling the frantic moments, another survivor said people jumped out into the wooded darkness in the rain from the emergency door.

"As soon the flight crashed, the emergency door was opened and people jumped out to safety," the survivor said.

Describing the horrific minutes that stretched into what seemed like hours, Riyas said the flight went around the airport twice before attempting to land.

"I was in the back seat. There was a big noise and I don't know what happened after that," he told a media channel after he was rescued.

Ashik, undergoing treatment at a hospital here, was thankful to the fire personnel who reached immediately and moved the injured to safety.

Unmindful of the rain and the risk of contracting the coronavirus infection, locals joined police, fire and other forces in the heroic rescue effort.

Shimna Azeer, a doctor at a private hospital, who attended to some of the injured, said she was astonished at the willingness of the volunteers who helped in taking the injured to hospitals.

In spite of the COVID-19 restrictions and the heavy downpour, the volunteers did a fantastic job, forgetting about the safety to their own lives as they selflessly got into the rescue operations, wearing masks that got wet, Azeer said.

One may call it good luck, but for two Indian expats it was God who prevented them at the last minute from boarding the Air India Express plane.

Noufal Moin Vetten, an Ajman resident working as an office boy in a Sharjah school, was booked to travel on the flight and had checked in as per schedule.

Recounting his miraculous escape, Vetten, a resident of Malappuram, Thirunavaya, whose visa was cancelled a week ago, told Gulf News: "I was handed my boarding pass, but when I reached immigration, they told me I had to pay a fine of Dh 1,000 (Rs 20,430) for overstay. I had only Dh 500 (Rs10,215) with me."

"I called my school PRO and he told me to come back. He said they would follow protocols and pay the fines before sending me," he said.
Vetten was disappointed and called his family to let them know.

"When I heard about the crash, I was saddened for all the passengers. But I'm so relieved I missed it. God has been really merciful," said Vetten.

Afsal Parrakodan, a resident of Abu Dhabi, had a similar stroke of luck.

"My work visa was cancelled about a week ago. After getting my boarding pass, I was told I had to pay a fine of Dh1,000 at the immigration counter, but I had only Dh500 on me."

"I was very keen to board the flight and be with my family. So I called a friend who brought me the additional Dh500, but by then, my baggage had been offloaded and the flight's doors were closed," said Parrakodan.

"I was feeling very sad and called my mother to tell her I had missed the flight. But a few hours later, when I learnt of the crash, I couldn't help but feel relieved and thankful to God for saving my life," said an overwhelmed Parrakodan who plans to fly back next week.