A noted Durga Puja pandal in Kolkata this year will depict the agitation over the farm laws in the country, besides the killing of farmers in Lakhimpur Kheri in Uttar Pradesh. IMAGE: A Durga Puja pandal based on the theme of farmers movement showcasing the Lakhimpur Kheri incident, in Kolkata, October 5, 2021. Photograph: ANI Photo

A giant replica of a tractor being used by farmers to till land is placed at the entrance of the Dumdum Park Bharat Chakra pandal in the northern fringes of the city, depicting their struggle.

The sidewalks are adorned by the sketch of a car and a farmer lying on its path, accompanied by a line in Bengali -- motorgari uray dhulo niche pore chashigulo, meaning the car leaves behind a swirl of dust while farmers fall under its wheels.

Hundreds of sandals lie on the ground of the pandal, symbolising the scenes after a protest -- during which many lose their shoes amid police action. The main pandal is decorated with replicas of paddy, hanging from the roof.

Artist Anirban Das, who conceptualised the theme, told PTI that the names of farmers who died in the course of the agitation have been written in chits of paper on the giant tractor, which also has large wings. 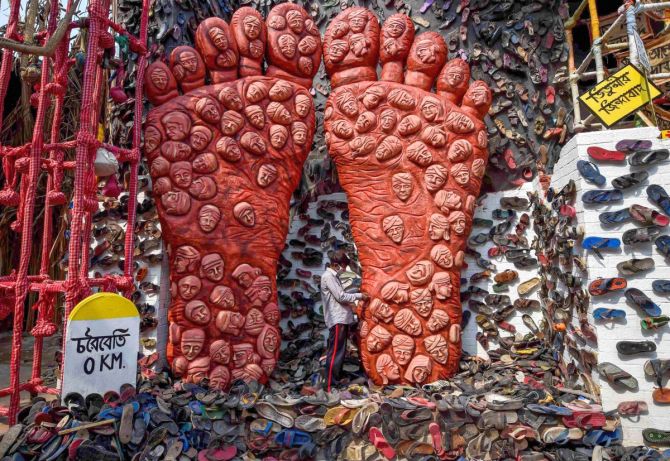 IMAGE: An artist works on a pandal depicting the plight of farmers in the country and their ongoing agitation, ahead of Durga Puja Festival in Kolkata, October 5, 2021. Photograph: PTI Photo

"The wings symbolise the wish to get free from the bondage," he explained.

Another poster at the pandal in English reads, "We are farmers, not terrorists, farmers are food soldiers."

The puja committee's secretary Pratik Choudhury said they want to highlight the exploitation of farmers. 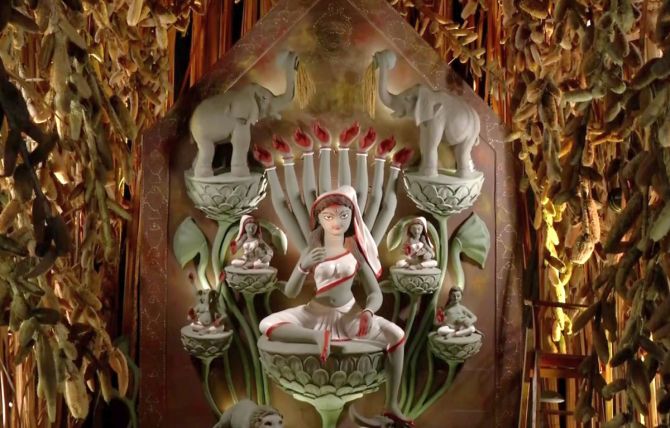 IMAGE: A paddy field is shown on the main portion of the a pandal where Durga idol is placed which depicts how important is agriculture and its production as Pooja pandal based on the theme of farmers stir showcasing Lakhimpur Kheri incident, in Kolkata, October 5, 2021. Photograph: ANI Photo

"From the days of Tebhaga movement in 1946-47 to the recent agitation against the three pro-corporate farm bills, we have sought to narrate the story of the farmers who provide the food to us," he said.

"The recent incident in Uttar Pradesh's Lakhimpur Kheri where four farmers were knocked down by a vehicle and killed during a protest happened when our pandal was almost ready. But, we incorporated it," Choudhury added.

Farmers in the country have been protesting for nearly a year against three laws, which they say would benefit the big corporates. The government defends them, stating that reforms are needed for the sector. Several people have lost their lives during the course of the agitation.

On Sunday, four protesting farmers were allegedly knocked down by vehicles driven by the Bharatiya Janata Party workers in Uttar Pradesh's Lakhimpur Kheri. Four others also died in the violence that followed, including the BJP workers and a driver who were allegedly lynched by the protesters.

The Durga Puja pandals in Kolkata have always depicted the current socio-economic and political issues.

Last year, the Barisha Club in south Kolkata built its pandal on the crisis faced by the migrant workers amid the nationwide lockdown.

This year, Sashthi is on October 11 -- the beginning of the Durga Puja celebrations.