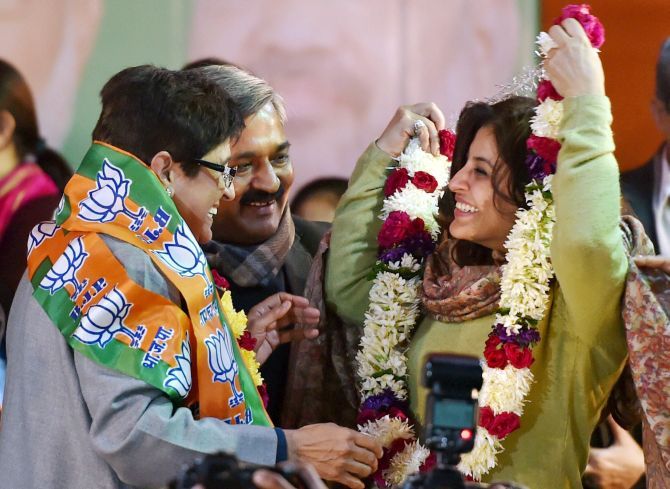 The Aam Aadmi Party has launched a twitter war against Kiran Bedi and Shazia Ilmi, who have joined the Bharatiya Janata Party by pulling out old tweets of the two.

In a subtle attack on Ilmi on Wednesday, AAP chief Kejriwal took a swipe at Ilmi by retweeting one of her tweets, dated November 21, 2013 titled 'Hypocrisy, thy name is BJP', The tweet by Ilmi, who was in AAP at that time, criticises the BJP and the Congress over its funding.

Founder AAP member Kumar Vishwas posted more than half-a-dozen old Kiran Bedi tweets in which she gave her views on the Congress, the BJP and Prime Minister Narendra Modi. The tweets were of 2010.

"CM Gujarat has a right for communal harmony. But what if first planned to reach out to families in the need of healing," said one of the Bedi's tweet on September 2011. "One day, Namo (Narendra Modi) will have to respond with clarity about riot massacre," said another tweet posted by Bedi on March 16, 2013.

On twitter #KiranBedi and Shazia Ilmi were trending, but a sizable number of tweets came from regular AAP tweeple.

When asked about Kumar's tweets, Kejriwal said he will speak to him.

"Our old tweets are being retweeted. Then I used to believe in Kejriwal as a leader. There were reasons behind my parting ways with the party. Now in Modi I am seeing a new light," Ilmi said.