Senior leaders Mallikarjun Kharge and Shashi Tharoor, in the race for the post of Congress president, not only possess contrasting demeanour but have had an equally disparate political journey. On the one side, there is the 80-year-old Kharge, a grassroots politician and a hardcore loyalist of the Gandhi family, and on the other is the 66-year-old Tharoor -- articulate, erudite and suave -- who is known for speaking his mind and who joined the Congress only in 2009 after a long stint at the United Nations.

The contrast is not limited to their demeanour and thinking but also their backgrounds -- while Kharge was born in a poor family at Varavatti in Bidar district, Karnataka, did his schooling and BA as well as law in Gulbarga, Tharoor was born in London and had a phenomenal educational background.

A leader with more than 50 years of experience in politics, Kharge, who was elected MLA for nine times in a row and has been pitched as a Dalit leader by his party colleagues, has seen a steady rise in his career graph from humble beginnings as a union leader in his home district of Gulbarga, now Kalaburgi.

In 1969, he joined the Indian National Congress and went on to become president of the Gulbarga City Congress Committee.

That Kharge was unconquerable at the hustings was mirrored until the 2014 Lok Sabha polls in which he bucked the Narendra Modi wave that swept Karnataka, particularly the Hyderabad-Karnataka region, and had won from Gulbarga with a margin of over 74,000 votes.

He has won from the Gurmitkal assembly constituency nine times in a row before he plunged into the Lok Sabha poll arena in 2009 and has been a two-time MP from Gulbarga parliamentary segment.

However, in the 2019 Lok Sabha polls the veteran leader was defeated by the BJP's Umesh Jadhav in Gulbarga by a margin of 95,452 votes. That was the first electoral loss in Kharge's political life spanning several decades.

On the other hand, Tharoor made a lateral entry into politics following a long career at the United Nations, which included serving as senior adviser to the secretary-general, in addition to his role as under-secretary-general for communications and public information.

Tharoor entered politics after he announced his retirement following his second-place finish in the 2006 selection for UN secretary-general to Ban Ki-moon, and was elected to Parliament in 2009.

He has been a very active parliamentarian and has won three Lok Sabha elections on the trot from Thiruvananthapuram, but has not served on many party organisational posts besides being the chief of the All India Professionals' Congress.

Kharge is not considered as effective a communicator as Tharoor who has a reputation of being a formidable orator when speaking in English and is quickly picking up Hindi too. Also, while Kharge is a hardcore politician, Tharoor is a man of many parts -- an author, politician, and a former international civil servant --  straddling several worlds of experience.

Kharge is known to be a staunch Gandhi family loyalist, always politically correct and toes the party line, while Tharoor likes to speak his mind and was among the group of 23 leaders who wrote to Sonia Gandhi in 2020 seeking large-scale party reforms.

Kharge is an old-school politician who likes doing things the traditional way, while Tharoor is more driven by innovation and novel ideas.

Tharoor was a pioneer in using social media as an instrument of political interaction. Till 2013, he was India's most-followed politician on Twitter, until being overtaken that year by the current Prime Minister Narendra Modi.

However, his social media escapades have often attracted criticism as well, especially in the early days of his political debut, like with his 'cattle class' comment for which he had to later apologise.

Polling, if needed, will be held on October 17. The counting of votes will be taken up on October 19 and the results will be declared the same day. 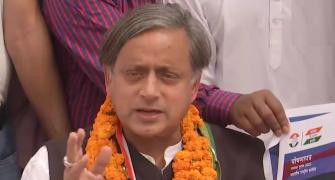 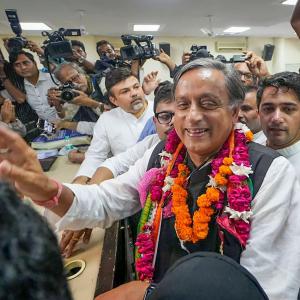